A Book of Lost Opportunities. 'Consequences' - by Penelope Lively 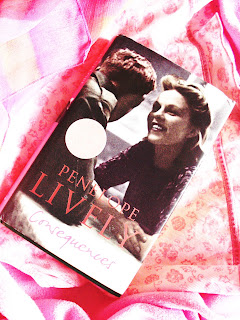 
This is a light read. Basically the book begins just before the start of the Second World War and moves up to about 2004? It follows the lives of three generations of women in the same family and tells their stories. However, it leaves a lot out and skips over some interesting events that I would love to have read about. There are some characters that floated in and out - male characters mostly: Lucas, James, Peter, Sam - that were sadly neglected and let fall by the way-side. How did they feel? What were they thinking? How did they get through life? They are lost opportunities, I think, and are what I miss most about the novel, now that I have finished it. As a result, I feel that the book lacks detail; racing ahead of itself, telling three stories speedily, instead of creating one, weighty tale.

The three generations of women have a lot in common, raising children alone and having two major love- relationships in their lives. One idea that the novelist, Penelope Lively, seems to be suggesting is that the father of your children doesn't have to be the love of your life, and that marriage is not necessary if you want to be a mother. Indeed it is quite dismissive about the whole notion of marriage - suggesting, to me, that love and marriage don't really go hand in hand, at least not always. There is a dichotomy in the text. Firstly it seems to suggest the great love between a man and a woman can alter your life, your very soul. But then, it also suggests that, sometimes, men are not really necessary to one's happiness.
Over all, I'd suggest, that this is really a book about mothers and daughters, although not in the usual, intense way that you might expect. This creates a cyclical structure to the text, although I will not ruin the story by discussing that further.

The title,'Consequences', I think, refers to one's children: the consequences of one's relationships, one's actions, one's feelings. After all, children are the things that move one's story forward - the making of future generations secures our genetic presence into the future. This is one of the main themes of the book, as one female protagonist merges into the next. One minute Lorna is the central character, then the novel suddenly becomes Molly's story and then, finally, it is through Ruth's eyes that we see the world. It is as if the three women are in fact the same woman, just living in different periods of history, dealing with different social pressures but the same isses: motherhood, finding love, and a place to belong.

I would recommend this book to a friend, for a nice read; nothing too challenging - but not to anyone considering leaving their husband/wife/partner... I wouldn't want to be the one to push them over the edge.
Also by Penelope Lively:
Posted by My Book Affair at 15:05

I love the idea behind your blog - I do know that feeling!

Is this the first book of Lively's that you have read? I think it's a bit out of her usual pattern - and I remember reading some reviews at the time that noted that. Some of her books are fantastic - City of the Mind, Heat Wave, The Photograph, According to Mark - and I re-read them often. Others - not so much. but YMMV.

Thanks Lisa - my first comment! Nice to know that someone is actually reading this blog! I really liked Lively's delicate writing style and the characters she created. Lucas was my favourite character in the book. I longed to find out more about him. After reading your comments I'll definately try reading some more of her work... maybe I will find something of Lucas there! Thanks for the recommendations.