Alone on a Wide Wide Sea ~ by Michael Morpurgo 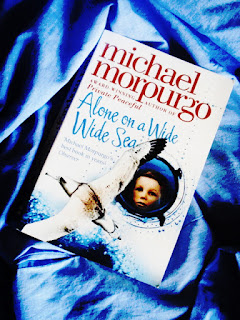 This is a book for young readers: age 10 - 14 perhaps.  It tells the story of 6 year old Arthur Hobhouse, who is orphaned during the Blitz in London and is sent across the ocean to Australia to find a new home. He experiences lots of difficulties adjusting to his new life: like when he is placed on a work-farm, which in reality is something akin to a concentration camp, from which he tries to escape.   He meets some interesting characters along the way; like Mighty Marty, his one true friend and protector from home; Piggy Bacon the cruel tyrant who, like a character from Dickens, bullies the children to within inches of their lives; Wes Snarky, the badie turned goodie; and Aunty Megs, the female Doctor Doolittle who lives in the Ark and dishes out love wrapped up in words of poetry to nourish the soul.
Many of the most memorable characters are animals, like Big Black Jack, the loyal, old  horse who helps them escape from Cooper's Station; Henry the Wombat, who will steal your socks and hat if he gets half a chance, and  Barnaby the donkey, who doesn't like to talk much.  Arthur lives to tell the tale, and it is this very tale which makes up the first part of the book.
The second part of the novel is narrated by Arthur's 18 year old daughter, Allie, who, armed with lap-top and Skype-phone, decides to retrace her father's steps, as it were, and sail solo across the sea to England in search of possible family there.  That is the basic plot, but this story is about so much more... family,friends, belonging, searching for home, love, faith, hope and the human spirit.
It has to be said that death is a major theme of the book too, but it is very matter of fact - someone dies, we are sad but the next day life goes on.  It is not at all sentimental.   There is no wallowing in grief. That said, hope and the ability of the human spirit to succeed is also central to the text.  The sections where Allie is adrift on the ocean, struggling to stay sane with nothing but an albatross to keep her company is very uplifting.  So the overall mood of the book is one of optimism.  Like Arthur, she too has difficulties to overcome and so the two stories have many parallels, though they are set many years apart. This prompts the reader to consider the relationships between generations and how struggle is a part of human existence, regardless of time.
There is also lovely poetry motif running through the book, which I enjoyed, with many references to Samuel Taylor Coleridge's  poem, 'The Rime of the Ancient Mariner'.  It really encourages the reader to research not only this poem but others too, such as 'The Second Coming' by W.B. Yeats.  So, the book works on many levels, with something for adults as well as younger readers.
Similarly, there is historical weight to this incredible story.  Children actually were shipped thousands of miles to unknown countries during the Second World War and this is a great way to teach young people, and adults too, about history, in a personal, moving way.

There is a section at the back of the book about the transported generation and some website addresses for  for those interested in further research.  I think young readers, teachers and parents will like the short, manageable chapters which make this a great book for classroom study, as well as night-time reading.

I would certainly recommend this book, especially to eager young readers who like a good story with a dash of adventure.