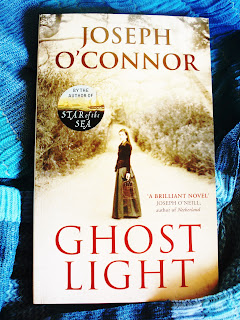 I've just finished reading 'Ghost Light', by Joseph O'Connor and my mind is still ringing with the sound of it, the music and words of Molly Allgood's voice, but let me not race ahead.  Let me do the thing properly.

In brief, the story bridges two worlds, the past and the present. It is partly set in Edwardian Dublin, in a time before the outbreak of World War One. It tells the tale of a teenage, working class, Catholic, Dublin girl, who was born above a rag and bone shop. She begins work as an actress in the Abbey theater and falls in love with an older, Protestant, Trinity-educated, wealthy playwright, John Millington Synge (He of 'Playboy of the Western World' fame.) They begin courting and become engaged. Despite family disapproval, both are steadfast in their attachment, regardless of the fact that John becomes ill.
The plot hops from the present - London 1952 - to various moments  and places in the past, Dublin, London,  New York, Galway, Wicklow etc., all places of importance in Molly's story, for this is Molly's story.
Although it is also a love story between herself and J.M. Synge, it is Molly who narrates the tale, but not in a normal way.  It is as if we ARE Molly, so closely are we immersed  in her character. It is as if we are her conscience, her soul, and she is talking to herself and us simultaneously.  Instead of using 'I', the first person narrative voice, he opts to use the second; 'You'.  It is surprisingly effective :

'You take a sour sip. Medicinal... you wear a dead man's boots. Well, no point if wastefulness.'
And so it continues for most of the book.

It could be that there is a ghost that goes where Molly goes and sees everything that she sees - and if that is so, then that ghost might be the reader or indeed John Synge.   The 'ghost light' of the title is mentioned in the book as the tradition kept in theaters to leave one light burning at night, so that the ghosts can act on the stage and see each other.  It's a wonderfully evocative title, suggesting that the very book itself is a ghost light, allowing the ghost of Molly Allgood and J.M. Synge to relive on the stage of our imaginations.

The story itself is a great one, a love story at the very heart of it, with such haunting, memorable characters that I think they will be with me forever: nice Mr Duglacz, from the book-shop, whose love letter came too late; Mr Ballantine, the publican who heartbreakingly sneaks a bottle of milk into her carpet bag; Grannie, emerging from a pile of rags on the bed; John Synge, the rain dripping from his hair. Yet is is the character of Molly that is so wonderfully presented to us, that I do not wish to forget. Not unlike Joyce's Molly from Ulysses, this Molly bears her soul to us; her decency and her vulgarity, her innocence and her arrogance. We love her for her playfulness - she would flirt with the Pope himself, but there is an earnestness about her too that is bewitching.
O'Connor has conjured up a woman, half real, half his own invention, that surely will become one of the great female characters of modern Irish fiction. Yet that is not all he has achieved. He has brought to life a world long gone, a Dublin of the past that seems vaguely like home to me.  That being so, it was a thrill and delight to step back in time between the pages of this book, to hear the vernacular and Dublin-isms that my grandparents might have known. Witness this conversation when J.M Synge comes to Molly's house for tea:
' Grannie: Do you know what it is they need? The fine Irish people.
A good kick in a place wouldn't blind them.
Molly: Grannie, for the love of Jesus...
Mother: And our Molly's a holy terror for the books, Misther Synge.
She's that many o' them read, I don't know where to look.
If she isn't a scholar, she met them on the road... a quare
one for the books.'

Note how this section reads like a play. Others are take the form of a letter, one of a headstone transcript. But mostly the book is written in a prose style that is anything but ordinary. Almost every sentence contains some evocative image, some witty insight that builds, layer upon layer, until the story unfolds, in the way a poet might deliver meaning. As an example:
' Your impulse was to hurry away.  You felt doors opening inside you, and you didn't want to go through any of them again'.
So this novel, surprisingly, possesses something of the feel of a poem, where meaning comes between the lines and lingers with you long after the story has been told.

I recommend this book to everyone who loves a well-crafted, good story. The language alone will happily keep you up late into the night. I had it finished in 2 days because I simply fell in love with it and could not bear to put it down. I give this book my 'Blooming Brilliant' award and envy anyone who has not yet delved into its pages, and the promised delight that awaits you there.

If you liked this book you will love 'Galore', by Michael Crummey.  It has the perfect blend of poetry and passion in a Newfounland landscape.  Here is my review: http://www.mybookaffair.net/2011/10/galore-michael-crummey.html

You got me until you mentioned the second person narrative. I could never stomach that.

It is quite odd, but actually kind of endearing by the end of it. Please don't let me put you off it, it is such a great book.

The last Joseph O'Connor I read was The Salesman, and I walked away feeling like he was a genius.

Jennifer, that is just what I thought after reading this book. I was on cloud nine when he got in touched and thanked me for this review! I've got to read more of his stuff. I think he is by far the best Irish author we have at the moment.