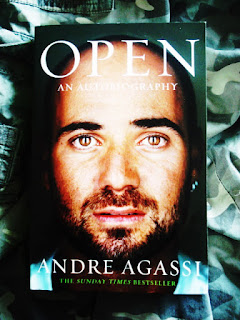 There is something very fitting in reading 'Open' Andre Agassi's autobiography, during the Wimbledon tennis season, it somehow brings the whole text into sharper focus. I have to admit that I am not a huge tennis fan, but this book still interested me. The introductory chapters, especially, dealing with Andre's early training, were fascinating. His brutally honest depiction of his equally brutal father was startling and very brave. He tells all and shows much anger towards the man who, while Andre was still in the crib, made a mobile from tennis balls and taped a table-tennis bat to his son's wrist. He was a man obsessed.

Much of the book deals with the constant struggle, physical and psychological, that Andre had to cope with all his sporting life. His love-hate relationship with tennis is made much of in the book, especially at the beginning. This clever use of antithesis surely came courtesy of Pulitzer Prize winning journalist, J.R. Moehringer, who helped Agassi put the book together. With his assistance, the text is an enjoyable read - for the most part. However, I thought it was overly long and, as you might expect, went into detailed descriptions of many, many tennis matches - who scored what point, who missed a serve etc.- until I could feel the exhaustion of the players myself. Having read the book I feel quite jaded and relieved that Agassi retired when he did because I could not have faced one more match!

As with any good autobiography, the reader comes to expect some juicy revelations and of these there are plenty in the book. I think Brooke Shields comes across least favourably, but I have to say I sided with her much of the time. Living with a man who would not (could not) speak for days on end after losing a match must have been difficult, especially when his idea of having a good time was vegging at home on the sofa, or eating a burger! He was unspeakably unfair in his treatment of her, proposing when he actually wanted to break-up with her, although being so wrapped up in himself, he probably did not even notice this. Don't get me wrong, Agassi narcissism is completely understandable, being trained to do one thing - be the best tennis player in the world. How could you not be self-obsessed, as your body, your mind, is your meal ticket. Yet there was so little of the real world present in this text. World events, if they take place outside the limits of a tennis court, never make it into the book. As such, it is a very closed, limited, depiction of life, which captures perfectly the stifled, suffocating life as a tennis pro.

This is in complete contrast with the book's title 'Open', which has so many connotations for a tennis player. More than anything, it refers to the openness with which Agassi tries to tell his story. However, although the book is filled to the brim with details of various matches, there is very little of consequence about his relationship with his mother, ex-girlfriends, his wives and his children. They are only mentioned in relation to his tennis, and as such the book reads like a series of diary entries,going from match to match in chronological order, with people, like his father and friends, suddenly disappearing from the story. It seems clear that the openness of the title only refers to HIS own story and does not relate to the people around him, whose privacy he protectively maintains. There is an exception of course; his opponents. They are fair game for his venomous tongue. They are a collection of cheats, poor-losers, begrudgers and robots. He certainly holds nothing back when he is describing them, with his greatest disdain being reserved for Jimmy Connors.

Above all, the book shows how lonely the life of a tennis player can be and how lonely Andre Agassi was for such a long time. He carefully surrounded himself with a series of father-figures, people he needed, to help him cope with the various aspects of his life, his trainer Gil being the real hero of the book. I think everyone should have a Gil in their lives, to frighten away bullies, sit with you in operating-theaters and stand guard outside your apartment in a scary city. This is ultimately a story of endurance; an inside look into the ups and downs of life in tennis, a must for anyone who is a fan of the game, and enjoyable even for those who just like a good story. Worth a read? Yes. Just grab yourself some Robinson's Barely Water, a bowl of strawberries and cream, and you will have yourself a front row seat in Andre Agassi's private players'box for a match you won't forget.
Posted by My Book Affair at 20:27