Elizabeth and her German Garden ~ by Elizabeth von Arnim 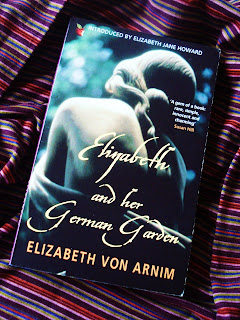 What a delightful short novel, 'Elizabeth and her German Garden' is, especially when read on a warm summer's day. It is made up of a collection of diary entries from April to May, in the late nineteenth century in Germany, before the two world wars made living in Germany so difficult for an English woman. The Elizabeth of the title, has escaped to her husband's country home and has fallen in love with it's dilapidated garden. She promptly decides to make the country hideaway her year-long home and gardening becomes her passion. Regardless of the weather or the season, she can be found out of doors, harassing the various gardeners (they keep leaving for some reason)and urging them to plant and prune as she would like. There are pages and pages of floral descriptions, which would truly delight any keen gardener. However, as she is a novice, she makes numerous errors.

Interesting as this is, and Elizabeth does like to wax lyrical at length about her plants, the really interesting thing to note is how the lives of women in this period are described in the text. It is unthinkable that Elizabeth herself should ever take up a spade, or plant seeds, although she yearns to do so. Instead, she must have her gardener do it, as gardening is not regarded as a decent occupation for a lady of note. Elizabeth, of course, belongs to the upper classes and although she has more freedom than ordinary, working women, she is not allowed to tend her own garden. The right to truly express herself in the language of plants and flowers is denied her. Elizabeth herself notes that some of the Russian immigrant labourers on the estate are women. They are allowed to tend to crops. Indeed some of them are known to have given birth in the middle of a shift, only to return to work within the hour. This shocking glimpse into life of women just over one hundred years ago makes this an especially interesting read.

The views on women, as expressed by Elizabeth's German husband, known only as 'The Man of Wrath', are enough to make any modern reader squirm in disbelief. Women are, he says, '"like children...What you say... is all so young and fresh, what you think and what you believe, and not of the least consequence to any one."' [sic].
Of course Elizabeth pays no attention to him and manages to convince him to move the entire family to the country, which he does not want to do, and spends all her time in her garden, which he equally despises. One therefore might ask who has the real power in the household, and whose words have 'the least consequence' at the end of the day!

There is a small collection of characters in the book consisting of Elizabeth, her husband and her friend Irais. An acquaintance comes to join them for Christmas, called Minora, who befriends the nanny, Miss Jones. There are also a number of unhappy gardeners and lastly the nameless 'babies'. These are Elizabeth's children, who are known only by the months of their birth:'April baby' and 'June baby' etc. The various babies are very amusing and express themselves with great honesty and frankness, causing much hilarity as small children are wont to do. One conversation which comes to mind is all about where angels buy their 'dwesses'. There is much humour in the book, courtesy of Elizabeth's antics and her tongue-in-cheek comments. The gentle irony of some of her remarks made me laugh out loud in places. Also, there are some funny situations, like when the three ladies go for a winter picnic by the Baltic, where they manage to eat more glove-fur than sandwiches for their lunch.

If this book were written today it would take the form of a blog, being diary-like in form, and having a private yet public audience in mind. It is interesting to note that Elizabeth von Arnim did not put her name to the text when it was originally published, her anonymity giving her some semblance of artistic freedom so often denied at the time to women. I doubt very much that her husband would have been pleased with what she wrote about him, although her own friends must have delighted in it. I don't think their marriage was a lengthy one (mercifully). How far we have come in a hundred years.

Consisting of just over 200 pages, of large, sparce text, 'Elizabeth and her German Garden' barely constitutes a novel. As such, it is the perfect read for a sunny summer's day, as your ice-cream begins to slowly melt, in your very own garden paradise.
Posted by My Book Affair at 09:25