The Heart of the Matter ~by Graham Greene 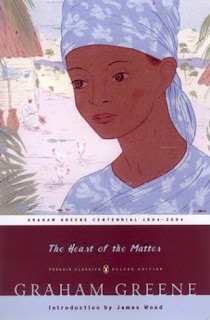 I have just finished this book and I am still reeling. I loved the main character, Major Henry Scobie from the start, mainly because of his honesty and integrity. So to see him slowly fall from grace was heart-breaking. It seems to me that this book is all about falling; falling in love, falling from grace and falling into despair. It's a gentle, enticing fall, which is so subtly done, that you hardly notice it until you hear a soft bump as you hit rock bottom, and think, how did I get here?

But let's go back to the start and retrace that fall. The story is set in a West African country during war-time. Scobie is an English policeman who has recently been passed-over for promotion. His needy wife cannot face this disgrace and so moves to South Africa leaving him alone. Their only child, a daughter, is dead and when a young woman, Helen Rolt, is taken, barely alive, from a tragedy at sea, Scobie's fate is sealed. He feels compelled to help her, but suddenly finds himself having an adulterous affair. This is the sourse of the novel's dramatic tension: how can one love two women, while retaining one's Catholic beliefs?
Scobie is in essence a very good person. He tries to do the right thing. Time and time again he foils the attempts of others to corrupt him, and we admire him for this. However, it is his relationship with diamond smuggler Yusef, that worries the reader. Can this man be trusted? We fear for Scobie's integrity whenever they meet.

Yusef acts as a symbol for evil - almost a version of Satin, who believes that Scobie is the one who can save him. Yusef tells him that he is a better person when Scobie is near. He is forever clutching at him, begging him to be his friend, to stay longer, to come again. He cannot bear to be left alone with his corruption and needs Scobie's presence to ease his conscience. He cries to think that Scobie might no longer be his friend. It as if he is sort of vampire, sucking the goodness from Scobie, and leaving corruption in it's place. Circumstances lead Scobie to make a deal with Yusef/Satan and such a debt cannot rest lightly on one's soul. The great irony is that here we have a good man seeking help from a bad one, all in an attempt to do some good. But it is a bargain made with the devil and ultimately it is a human soul which hangs in the balance.

Green's use of symbolism adds extra weight and meaning to the text, giving the book a haunting quality that is the tell-tale sign of good literature. And this book is full of symbolism: Scobie's broken Rosary is the most obvious symbol, signifying his adultery and how he has broken faith with God. Then we have the murder of the innocent servant Ali, who Christ-like was betrayed by his friend. But most central to the text is the symbolism of the book's title: 'the HEART of the Matter'. The human heart has many associated connotations, all of which are referred to here: the love Scobie feels for his mistress Helen and his wife Louise; the physical heart, supposedly diseased and the source of Scobie's angina; and the heart as symbol of the human soul. Indeed at the heart of the book is the plight of the human soul: the constant internal struggle with our conscience to do what is right.

As such, the book is about the fallibility of the human soul. It seems that none of us are beyond temptation. First we see the temptation of the flesh; what began as a wish to protect a fellow human ends with adultery, a mortal sin. Then it is as if Scobie stumbles into a declining, inescapable, vortex of sin, each worse than the one that went before: lies, corruption, murder. Every step leads Scobie further and further away from redemption and we realise that there is only one possible conclusion to the story.

Greene's characterisation is flawless. The characters interact in such a way as it almost feels like a dance, now coming together, now moving apart. In Scobie and Yusef we have two wonderful creations, each morphing into the other at various moments. There is the solitary Wilson, who snoops, sneaks and stalks around the periphery, like a mid-night shadow. Then we have the twin sirens, Helen and Louise, who each begin to mirror the other, in action and word, giving us the uncomfortable feeling that none of us is really as unique or original as we might like to believe.

'The Heart of the Matter', is a great book and would make a really terrific book club read. It is a cautionary tale of what happens when you make a deal with the devil, and love too well. So sit back and enjoy Graham Greene at his best, safe in the knowledge that you would never make such mistakes or fall so hard?

Thanks Jennifer O. I think we have the same taste in authors and poets! :)