Star of the Sea ~ Joseph O'Connor 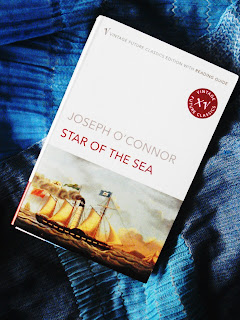 I took this book on holiday to the wilds of County Donegal and it is fair to say that I lived every word. It filled my waking hours, my sleeping dreams and everything in between. Around every bend I saw the fleeting shadows of its characters; every ruin was the abandoned home of Mary Duane or Pius Mulvey; and every mouthful of potato tasted like a blessed gift. The historical backdrop of this novel is the Irish Famine, the immensity of this event being such that it colours the entire text: the plot, the characters, the atmosphere. The story is concerned with a group of travellers who make the journey from Ireland to New York in 1847 on a ship called the 'Star of the Sea'. As such, the reader can pretty much guess what to expect with this novel... or can they?

Somehow, Joseph O'Connor manages to tell the tale in a fresh new way, while avoiding all the usual pitfalls that dog every Irish novel set in this period. He cleverly leads the reader through the story by hopping backwards and sliding forwards, so that your mind is preoccupied with trying to piece it all together. With this slight-of-hand trick, the reader does not have time to overly dwell on the unfolding tragedy. Likewise, the story itself has many twists and turns, with unexpected revelations at regular intervals, which keeps the reader enthralled.

I find myself really struggling to identify who is the narrator of the text, which I am sure is a deliberate ploy by the author. The lack of any one definite voice in the text creates an unsettling, shifting feel to the book, which corresponds to the transient lifestyle of the characters and the surging and swelling movement of the ocean. The book begins and ends with the twin narrative musings of American journalist G. Grantley Dixon. His words wrap around the main novel like an extra dust-jacket, commenting on the three main characters of the text: Mary Duane, David Merridith and Pius Mulvey. While we get to experience first hand the thoughts and feelings of the latter two characters, we never get to see the world from Mary's point of view. Indeed, she only drifts in and out of the text whenever her path crosses that of another character. It is as if we only catch glimpses of her through a mirror, but she is so fascinating that we yearn to learn more of her story, to fill in the gaps of her life. What becomes of Mary Duane is one of the most compelling questions that drives our desire to read on.

While the wealthy Lord, Merridith, and the shambling labourer, Mulvey, are both fine specimens in their different ways, it is the character of Mary Duane that has been so beautifully crafted. In fact, Mary Duane might easily be seen as a symbol, not only for every Irish woman who had to struggle for survival, but for Ireland itself. Long ago, when it was forbidden by the English to write or sing about Irish nationalism, bards and poets composed symbolic lines about a dark haired beauty, a woman, badly treated by those around her. Songs like My Dark Rosaleen,(Roisin Dubh in Gaelic) although appearing to be about a neglected and put upon woman, were actually discussing Ireland's struggle for freedom. So can be seen the character of Mary Duane; abandoned, abused and betrayed. Indeed, O'Connor dedicates almost two chapters of the book to the art of writing an Irish traditional folk song. Such a strange thing to do in the middle of a novel I thought, which made me wonder, until I noticed that all of the the six or so possible story lines, that appear in traditional songs, which O'Connor refers to in the novel, apply to Mary. She IS the embodiment of Irish song: she is a literary version of My Dark Rosaleen, and so she is a symbol of Ireland itself.


As I read through the pages of this book, something about its atmosphere reminded me of Wuthering Heights and low, there on the very next page was a reference to that very book! There are a number of plot similarities, which I cannot reveal here, which add a delicious extra layer to the Star of the Sea, reminding us that the world was not such a barren, god-forsaken place entirely during the Famine; that great writers, and great literary works were still coming into being. Part of the story is narrated through the diary of Captain Lockwood. Any Bronte fan will easily note that Lockwood is also the name of the initial narrator of Wuthering Heights, a sign of O'Connor's appreciation for that novel I presume. Indeed, my other favourite Victorian writer, Charles Dickens, makes a guest appearance in the book as well, a double delight. I would go as far as to hazzard a guess that the character of Pius Mulvey is somewhat based on Dickens's creation, Abel Magwitch, from Great Expectations, as both are, at one time, residents of Newgate prison, walk with a limp, and have criminal leanings. 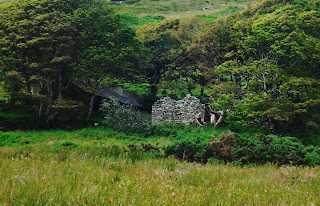 However, if the text deals with the hell that was the Irish Famine, it also shows glimpses of heaven. We see young Mary Duane walk through her garden of Eden with David Merridith , in a long summer of love. It is a beautifully captured scene and funnily enough the one which resonates most loudly with me on having finished the book. The biblical imagery is also captured in the story of Pius and Nicholas Mulvey, with dire echoes of Cain and Abel. Yet this is a book not so much about religious difference as about class difference. For the poor, there is little mercy, yet, O'Connor manages to show the positions of landowners and tenants in an unbiased way; how people, rich and poor, made good and bad choices, something quite original and brave in a book about what is sometimes referred to as the Irish Holocaust.
Now that I am returned from the cottage in Donegal, I turn on the television to hear news of a new famine in Somalia, the worst in sixty years. In every face I see Mary Duane, her mother, her brothers, and know instantly the suffering and self-sacrifice that is going on off-camera. It is unfathomable that such horror remains in the world and I wonder have we learned nothing at all. And suddenly 'Star of the Sea' doesn't seem so much of an historical novel after all.

(Photos above taken on holiday in County Donegal, Ireland)
Posted by My Book Affair at 21:03

Email ThisBlogThis!Share to TwitterShare to FacebookShare to Pinterest
Labels: Joseph O'Connor, Star of the sea, Star of the Sea themes and style, The Irish Famine