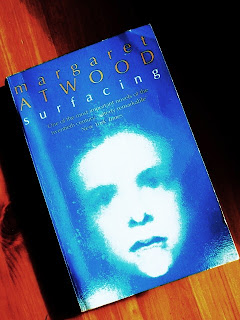 I was awake until dawn finishing this book, fighting off sleep until the end. And then I knew it - this would be a book pretty near impossible to review without giving it all away. I'd known almost nothing about the story until I was waist deep in it, only that it was about a girl revisiting her Canadian-island, childhood home with some friends, her father having disappeared. But don't worry, that's all I'll share with you on that score. I'll pick at the story just around the edges, giving nothing of the plot away.

Thematically, the story deals with life and death and how people can become disconnected with all that they knew in their childhood; their parents, siblings, and neighbours, as they move into adulthood. The characters seem broken, adrift, some clinging on for survival by a mere thread, or so it seems. Relationships are fragile, crumbling below the surface.

Trust and the lack of it is at the core of this book and Atwood forces the reader to consider who is a threat, who can be trusted. This is a first person narrative, so we only have the protagonists word for what is happening. Can she be believed? Is she a reliable narrator? As such the text is a psychological journey and we are taking it with a nameless narrator, whom we long to understand.

The title 'Surfacing' is perfectly chosen, having so many connotations, one of which relates to the protagonists spiritual reawakening as she dives into the world of memory and re-emerges, altered. But It is not as you might imagine; there is nothing predictable about this book; not the characters; not the language; not the plot. That is what I found so thrilling about the text. Just as you think you have figured out what has happened to the character, another wave of information lifts the plot and deposits you someplace different, your knowledge of the characters and story deeper and wider as a result.
I must mention Atwood's use of language in the novel. It is so evocative, yet quiet pithy. Like the landscape of the island, it is stark and bare at times, but Atwood's one-line observations can say more than can a whole page of text:'A divorce is like an amputation, you survive but there's less of you', or 'the echoes deflect from all sides, surrounding us, here everything echoes'. You could lose yourself in language like that.

As for the plot of the novel - I simply could not put this novel down. It is full of suspense, drama and mystery; where is her father? Why did she leave this place and never return? What is the damage that needs repairing?

It is not my place to tell you these things. Go read this short, brilliant book and search for your own answers.
Posted by My Book Affair at 13:31

Wow. You've made me want to read it, though I'll force myself to begin reading much earlier in the day. I love staying up all night to read but hate it at the same time.

It is a great book. I'm still thinking about it over a week later! I think staying up late makes the reading experience all the more intense and slightly naughty too!