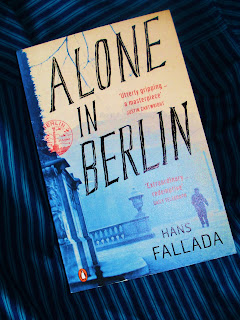 It took me a little longer than usual to finish this book, because I longed to escape from it. Yet 'Alone in Berlin' had an invibible hold on me. I was trapped by it; the story was so gripping, I didn't dare to leave it hanging there haunting me; I had to end it. I owed it to the characters, to those who were suspended in time on page 241. And now that it is finished? Well, let's just say that I understand more about what it is to be human after visiting its pages, having journeyed into that place in history peopled by mad-men and tortured angels.

The book tells the true story of Otto Quangel and his wife Anna, (not the original names of the people involved) who decide to hit out at the Nazi regime in wartime Germany, by writing postcards decrying the actions of the Fuhrer. They leave them at various locations in Berlin, for the public to find. It's a dangerous action to take, punishable by death, in a world where everyone is a spy; your child, your neighbour, your boss.

So much for the plot. I cannot tell you any more about that or the book would be ruined for you. I will tell you that since reading this book, I have a deeper understanding of what took place in Germany during the Second World War. It's as if a veil has been lifted. I always wondered what the Germans were doing, letting so many people suffer in such brutality in the concentration camps; how Hitler and his henchmen were allowed to run riot for so long without decent people putting a stop to it. Now I know.

The brilliance of this book - and I do class it as a masterpiece - is that it captures the essence of fear. Written in 1946, just a year after the war ended, it is soaked in the atmosphere of that time: the terror, the distrust and the claustrophobic atmosphere of life under Hitler. I never realised how the every day German people lived under the constant threat of concentration camps and how brutally they themselves were treated by their own police force and the Gestapo. The author, Hans Fallada, tragically died before his book was published, but letters tell us that he knew he had written a good book. He at varying times during the war he was imprisoned for his anti-nationalistic writing but was also pressurised to write material in support of the Nazi Party. As a consequence, he spent much of the war locked up in a psychiatric hospital. It seems Fallada knew only too well the price of having a conscience in Nazi Germany.

Yet, at the heart of this book, there is a great love story. Against all odds, we see two people, Otto and Anna Quangel, risk everything for a cause they believe in, and in doing so, become deeper in love than they have ever been. They cling to each other, trust in each other. It's inspiring, moving.

But the plot involves various other characters too, many of whom would be at home in the dark corners of a Dickens novel. There is Enno Klunge who would sell his mother for a piece of bread; Borkhausen, the blackmailer, who preys on the newly-bereaved in case they should rant against the Fuhrer in their anger; Obergruppenfuhrer Prall who is so drunk on French wine that his wild and vicious attacks leave even the SS fearing for their lives; and Baldur Persickle, Nazism personified, whose malevolence knows no bounds.

Balanced against these despicable characters are the likes of Eva Klunge, the post-lady, who quietly delivers the death telegrams around the streets of Berlin and takes a stand against The Party; Trudel Baumann, who dreams of a private, safe existence for her husband and unborn child; and Judge Fromm, who, like a magical wizard from Tolkien, appears out of nowhere to achieve the impossible. I do not know if any or all of these characters have their basis in real life, but I do know that I will never forget any of then, so masterfully have they been created.

Fallada is indeed a master. Consider the cleverness of the book's title - especially the use of the word 'Alone'. It and all its connotations mean so much in relation to the story as a whole. Each character at some point comes to realise that they are all alone in the world. Some are driven by self-preservation, knowing that each person is ultimately alone and must ensure their own survival. Similarly, a number of characters are faced with physical isolation; and the author considers the consequences of solitary confinement and how it effects people. Characters are also forced to face their conscience, realising, or not, that they alone are accountable for their actions.

The idea of being 'alone' in the novel is also important in that, at times, it seems that the Quangels are alone in their defiance of Nazism - acting alone in Berlin- and while it appears that none of the German people really made any resistance to the Nazis, not like the organised resistance of the French for example, this book demonstrates that there was some defiance, but that it happened on a small, individual scale, as people acted alone.

This book is not one to read on a summer's trip to the beach, but is is still well worth reading. If you are interested in the history of this period, or simply would like to read about the triumph of the human soul, then this wonderful, wonderful book is for you.
Posted by My Book Affair at 12:08

Email ThisBlogThis!Share to TwitterShare to FacebookShare to Pinterest
Labels: Alone in Berlin by Hans Fallada, Characters and themes in Alone in Berlin, Germany in WWII, Second World war Fiction