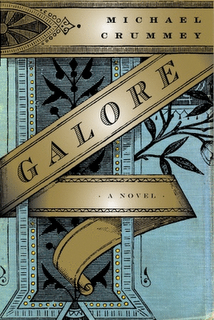 If it were possible for a book to have a taste, then 'Galore', by Michael Crummey, would taste of salt water.  Every page is dripping with it: steeped as it is in the noise,and vitality of the sea. And what could be more fitting in a story about an isolated community on the island of Newfoundland some two hundread years or more ago.  It is difficult to tell when exatly the story is set, as the action occurs out of time and place, as we know it.  There is a blurring of reality and fantasy: a place where ghosts dwell amongst the living, where fishermen fall for mermaids, and where full-grown men are re-born from the guts of a whale.  As such, Crummey has based his book on a wonderful series of "what if's".  What if such a thing were possible?  What if Jona was actually swollowed by a whale, as the bible tells us.  And what would the reaction be if, one day, Jona were thrown up on a beech, in a place and time where superstitions were powerful motivators in society.  For the story of Jona - known here as Judah- is at the heart of this novel and immediately we are enthralled with the desire to finally learn of the fate of the character who for so long lived in our childhood imagination.  Like some sort of Boo Radley from the distant past, we yearn to know Judah's story and to learn what secrets lie behind those pale blue eyes. Indeed, the very first line of the book tells us the fate of Judah.  'He ended his time on the shore...'  To speak of endings at the very beginning of this tale is not enough for the reader and spurs us on to learn more.  Indeed, as time goes on, it becomes less and less acceptable that the narrator was telling us the truth in that first line.  In the world of Newfoundland superstition, even the rules of narrative fiction cannot be taken as gospel.
Yet, there are other biblical echoes throughout this novel.  We see Mary Tryphena and Absolom Sellers sitting in Kerrivan's tree together  They are cousins, forbidden to fall in love. He takes an apple and passes it to Mary to take a bite and their fates are sealed. Similarities with the story of Adam and Eve are unmistakeable here.  Indeed, we find our very own Cain and Abel chracters, in the sons of Absolom Sellers, and something of Noah's tale in the slow building of the huge boat, that will ultimatley save the community from certain extinction.
But it would be a mistake to limit the achievement of this novel to that of a modern re-telling of Old Testament stories.  This novel is so much more than that.  It's characters are revealled to us like a soul of a sinner is exposed in the confessional.  We learn about them from the inside out: given only the slightest hint about external appearances, but shown detailed accounts of the innermost desires and passions.  Like Joyce and Woolf, Crummey takes a light and shows us the inner-workings of his characters's minds.  We feel we know each character intimately, by the colours found within; the hue of their souls.  It is owing to such characterisation that we feel so bereft at the passing of each generation.  It is heart-wrenching to say goodbye to the knowlegde and wisdom of each character; their stories, their pain, their secrets.  Indeed, this feeling is best expressed by Devine's Widow, a natural-born witch if ever there was one, who says, 'She felt like she was being erased from the world, one generation at a time, like sediment sieved out of water through a cloth.'  It is no surprise to learn that Crummey is a fine poet  as well as an author of fine books. Yet the story belies such thoughts and actually reveals the cyclical pattern of lives and how one generation merges into another, with family traits being passed down through the family line.  There are patterns to be found and comparisons to be drawn.
The tell-tale sign of the poet is also apparent in the purity of the text.  Crummey writes of a world laid bare, without embellishment, with scant respect for the rules of language, reflected in the lack of punctuation in his writing.  Apostrophies highlighting dialogue are seen as unnecessary trimmings that are at odds with this tale of bare essentials, of life lived among the elements.  As such, Crummey's prose style is akin to the beauty of drift wood: rugged, stark and at times crude, but so steeped in narrative history, that it cannot help but be valued and higly prized.  This is a must read novel, for anyone who ever imagined 'what if', or  who simply ever imagined.  With 'Galore' you will be left with the taste of the salt -water in your mouth and gritty sand between your teeth, a pleasure truly not to be missed.

I really love your opening lines...salt water dripping from the pages. Beautiful way to describe this book, a book that I absolutely loved from start to finish.

Thanks - what a fantastic book. I could have written about it forever. Loved,loved,loved this book!