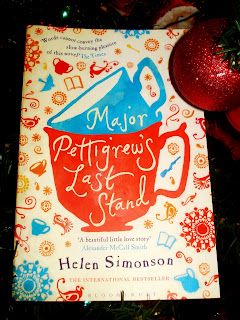 It is perhaps fitting that I settle down to write this review with a cup of hot tea at my side, as tea-drinking, and all that we associate with that pleasure, (conversations started, friendships made, secrets shared etc.) is what I like about this book.  Indeed, reconsidering the cover of this novel, the artwork is perfectly apt.  A pair of tea cups feature greatly in the story, triggering old  memories and inspiring new. There is so much symmetry and possibility with a pair of tea cups: one just seems so forlorn in comparison.

And this is just how we see Major Pettigrew for the first time; solitary, overlooked and quite derelict in his dusty cottage.
Set in the sleepy English village of Edgecombe St Mary, the very name has inescapable echoes of the famed village of St Mary Meade, the setting of Agatha Christie's Miss Marple,and here too the world is never changing and steeped in the traditions and social hierarchy of middle England.

Still, this is a refreshing love story where the characters are of the more mature variety, on their second chance of happiness and who clearly know what they want from life: appreciating how good life can be when there is love and how lonely life can be without it.  They are no procrastinators. That is left to the younger generation, who give up on love for the sake of monetary gain, social standing and mere convenience. One flaw, I would say, is that the main characters seem much older than they really are, considering that the major is of the same generation as John Lennon and Mick Jagger.  It seems odd that he should be so affronted by the decadence of modern living.
That said, this novel reads like a ready-made script, just crying out for cinematic adaptation.  Indeed one can even predict it's Sunday night slot on BBC One.  I'm sure there would be a role for Maggie Smith in there somewhere, with, perhaps, John Cleese playing the love sick Major? The characters and events of this story would not be out of place in any BBC period drama: featuring impossible love; the avarice of younger generations; overbearing relations; stolen inheritance; runaway bridegrooms and dangerous old women with threatening knitting needles! In fact it seems quite incongruous when someone pulls out a mobile phone to check their messages,propelling us back to the twenty-first century with a stinging slap.

Author Helen Simonson presents us with a selection box of characters that we would expect in any text set in an English village from 'Last of the Summer Wine' and 'The Vicar of Dibley', to 'Middlemarch' and 'Emma'.  If you delight in such a story, 'Major Pettigrew's Last Stand' will not disappoint.  It's brimming with delicious descriptions of the English countryside, cottage gardens and coastal views.  And if there is one season that's best suited to the charm of this novel I would suggest that it is the Christmas holiday period.  One particular section wonderfully evokes Christmas in England complete with old lamps burning in cottage windows.   So I suggest this book be read deep inside a cushioned sofa, amid mountains of mince pies and between glorious sips of delicious, hot tea, for 'Major Pettigrew's Last Stand' is a fine book to escape into, as comforting as your favourite Sunday afternoon Miss Marple re-run, and just as familiar.  My one warning is that this is not a book to be rushed:time should be taken to really appreciate and enjoy this fine, flavoursome brew.

P.S. If you liked this novel, then I highly recommend Natasha Solomons' 'Mr Rosenblum Dreams in English' - reviewed here: http://www.mybookaffair.net/2012/08/mr-rosenblum-dreams-in-english-by.html
Posted by My Book Affair at 13:06 No comments: