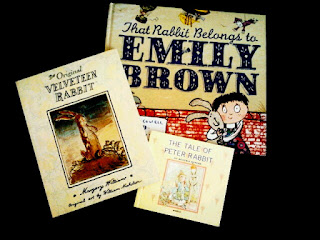 Children's fiction has long been fascinated  with the soft, adorable, long-eared, mammal: the  bunny-rabbit. In 1893 Beatrix Potter wrote the colourful 'Tale of Peter Rabbit', about the mischievous little bunny who was apt to get into trouble and was made to pay dearly for his escapades.  Although Peter winds up safely back home with his mother after his adventures, he is made to suffer horrible anxieties as he hides from the menacing farmer, who is tracking him down.   As it says, poor Peter was 'out of breath and trembling with fright'.  Poor Peter comes within a hair's breadth of the cooking pot.  It seems that Victorian children were made of sterner stuff than the modern day variety.  It would take a braver mother than I to read such a tale to a toddler at bedtime, so perhaps the Victorian mothers were of a different kind too! 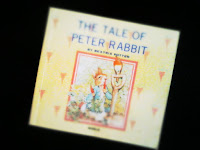 Of course, the twentieth century also had its own celebrated rabbit, but this time he was a toy bunny, although he did not end up that way.  'The Velveteen Rabbit - or How Toys Become Real', by Margery Williams, was published in 1922, and tells of the toy rabbit who longs to be a real rabbit.  This bitter-sweet tale rends the heart in two, as the toy rabbit is stolen from the nameless, generic 'Boy' who is suffering from a fever.  This toy rabbit was capable of thinking and feeling, and misses the Boy dreadfully.  But worse still, he is meant for the fire, to be burnt, like all the other germ-ridden objects from the nursery.  What an horrific tale for a young child to hear!  It seems in 1922, between the two World Wars, children and their parents could face such tragedy before bedtime, and still manage to settle down to sleep.  As the title suggests, this book details the metamorphoses of a toy, who transforms from play-thing to real life creature, the very thing that every child, since time immemorial, has always wanted.

The present century has not been without its fair share of rabbit stories either, but one that I particularly love is the 2006 children's book: 'That Rabbit Belongs to Emily Brown', by Cression Cowell.  Here the child is as much part of the story as the rabbit, for it is the little girl, Emily, who has the power to bring Stanley, her old, stuffed, pink rabbit, to life.  Just like in 'The Velveteen Rabbit', the toy is stolen, this time by a naughty, spoilt queen, and it is Emily who comes to the rescue.  She gives some honest advice to the queen telling her to 'play with (her new teddy-bear) all day.  Sleep with him at night.  Hold him very tight and be sure to have lots of adventures.  Then maybe one day you will wake up with a real toy of your OWN'. 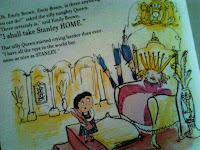 Here we see the child declaring what it takes to bring a toy to life; love and a little imagination.  It is no longer the sole preserve of the author, as with Peter Rabbit, or some magic fairy, as with the Velveteen Rabbit; to bring a toy to life.  It is made possible by empowered children everywhere believing in themselves and their ability to imagine.  Now doesn't that sound like a very twenty-first century way of doing things?
Posted by My Book Affair at 20:21

Email ThisBlogThis!Share to TwitterShare to FacebookShare to Pinterest
Labels: 'That Rabbit Belongs to Emily Brown', 'The Velveteen Rabbit - or How Toys Become Real', Beatrix Potter, by Cression Cowell, Margery Williams, The Tale of Peter Rabbit