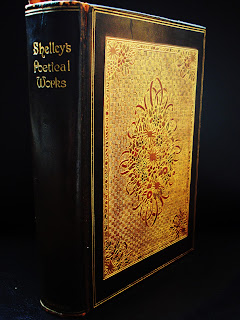 Continuing my look at the most prized books on my shelf , I come to my cherished copy of Percy Shelley's Complete Poetical Works, edited by Thomas Hutchinson.  It is a leather-bound hardback copy, published in 1925, by  Oxford University Press, inlaid and edged with gold.  It was a very special birthday present from a boyfriend many years ago and I thought it the most beautiful book I had ever beheld, or held for that matter, being, as it is, such a sensual book to hold it.  The cold leather, the faint musky smell and the beautiful green, red and gold of the inlaid floral design on the cover, makes this a very special book indeed, and very much in keeping with the deeply sensuous, highly evocative matter within.

Of course, it is a book of poetry, written by one of the greatest Romantic poets of all, so to explore the world of verse that it contains is to travel to far and distant lands at the hands of a master.  Interestingly, the book itself has done its own fair share of travelling, passing from owner to owner for almost one hundred years. The original owner was someone called Shelia, for the book has a sweet inscription on the inside cover, dated Christmas 1929: 'To my dear Maureen from her pal Sheila'.  It is so poignant that this book, so beautiful in appearance and decorated with ornate flowers should be passed from one woman to another as a testament to their friendship and should come to be in my keeping some eighty years later.

And while I do think of this book as mine, I never open it without thinking of Sheila and  Maureen, who must have loved and cherished this book just as much as I do. I think about the life the women must have had, living as they did between the Great Wars, at a time when the Irish Republic was still very new and Ireland itself had just gone through a brutal and divisive War of Independence.  For I am certain, owing to the nature of their names, and the phrasing of the inscription, that these were Irish women.  The book's presentation is of such high quality, as is the specialised nature of the subject matter, that I believe the women to have been of the middle classes, who discovered, over afternoon tea, that they shared a love of poetry.
One only wonders where the book was between 1925, when it was published and 1929, when it was given as a Christmas gift: forgotten on some dusty shelf, or wrapped in a box, awaiting a sale.  I have a feeling that the book first belonged to Sheila and was passed on to Maureen, who proclaimed to her friend how much she admired the poet.  Perhaps Sheila did not care for Shelley, or it was a love token from a lost love or husband she no longer cared for.  Or maybe it was Maureen and Sheila who were lovers, and 'pal' is some secret code for their amour which, at the time, could not be spoken of openly.  The romantic nature of the verse would seem to support this, or perhaps I have been reading too many Sherlock Holmes stories.

Either way, I cannot help but wonder what became of these women and their friendship and how this volume came to sit on a shelf in a Dublin second hand book shop at the end of the last century.  The happy and sad thing is, that I will never know, and this is what I like most of all: the mystery of the book remains.  Perhaps every book should come with a log book of owners, like cars do, so that we may know the story of the story-book and love it all the more for that.  Sometimes, it is not just the story within the book that is interesting, but also the story of the book itself.  And as for the old boyfriend who was good enough to send this book my way, well, 'Reader, I married him!'

P.s.  An ageing ribbon bookmarks a page still, as it did when it first came into my possession and I like to imagine that it was Maureen, or Sheila, who left this page marked for their friend's attention and now for mine.  In the spirit of sisterly friendship, I think it says something to all women about empowerment and the truth that hopefully comes to us all in the end, that power lies within us.

.... All men who do or even imagine ill
Fly me, and from the glory of my ray
Good minds and open actions take new might,
Until diminished by the reign of Night....

And the pure stars in their eternal bowers,
Are cinctured with my power as with a robe;
Whatever lamps on Earth or Heaven may shine,
Are portions of one power, which is mine.
Posted by My Book Affair at 23:37

But is now yours. What a lucky book!