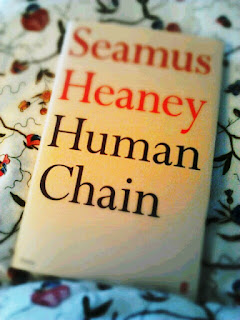 It's Saint Patrick's Day, a time for nostalgia; when the Irish everywhere dream of home and ache for the Ireland of the past, when things seemed simpler, when we were simpler and when the home fire and those around it were enough to sustain us through the cold, damp Irish days.  And so I come to Nobel laureate, Seamus Heaney, famed chronicler of Irish memory, to celebrate his most recent collection of poems, 'Human Chain'.

I bought my copy at the book's launch in Dublin, where Heaney delighted us all and moved more than one to tears, with his new verse and stories of how life had changed for him since suffering a stroke.  Somewhat smaller that I remembered him, he kept us captivated by the quiet lilting of his unmistakeable voice.  And what we few heard, who were gathered there in the half-light, was a wisdom, no less vital than the words of a saint or prophet, and as nourishing and soothing as that of a shaman.
The title of this latest collection comes from a poem that celebrates the things that connect people around the world, through our humanity, through the small things and, in this case, the lifting of a bag of grain.  It begins with the image of an aid worker passing out bags of meal  to a hungry mob, while soldiers shoot overhead and then, as in typical Heaney fashion, we are transported back to the Ireland of Heaney's youth, as he recalls the rhythmic swaying motion of lifting and swinging bags of grain onto a lorry.  Yet it is the letting go of the sack, 'that quick unburdening' that he dwells on saying, 'A letting go which will not come again.  Or it will, once.  And for all'.  The specific positioning of the punctuation in these last few lines of the poem dictates the meaning.  Heaney is not only considering his own death, but is reminding us, that, like Everyman, death comes to us all. r.

Another favourite poem of mine from this collection is 'The Butts', primarily because it reminds me so much of my late father.  It tells the story of a young Heaney, pressed up beside the cloth of his father's suit, not in a tender hug, for such a thing was not usual for Irish men of Heaney's father's generation, but as he leans into his father's wardrobe to search for cigarette butts to steal.  He is reminded of the stolen moments in the wardrobe as he cares for his elderly father, bathing and tending him, ' To lift and sponge him... closer than anybody liked...'  The simplicity and immediacy of the language is classic Heaney.  He takes us into the scene, the master story-teller that he is, and we imagine that we are listening to a friend recount the thoughts of the day.  Once again, Heaney is gently forcing us to consider the relationships between parents and children, reminding us that if we all leave home for distant shores, who will look after our old and sick?  It is a dilemma which is the source of much heart ache for those who emigration leaves behind and for those whom it steals away.

And then, Heaney celebrates place, his childhood  home, in Mossbawn. 'In Derry Derry Down', he creates the most beautiful and simplistic image of a world where beauty can be seen in an old bucket full of soaking, ripening fruit:

On a big ripe

Heaney reminds us of the joy of the everyday, in the simple things.  An it is this celebration of the small things that gives Heaney his power and relevance for Irish people today.  He is the bard in the corner, softly calling to the people of the house to listen to his words and reflect on what it is to be Irish, to remember a world where things were simpler and to remain true to their Irishness.
So if St Patrick saved Ireland from the snakes and the 'heathens', maybe we can say that Seamus Heaney is in a similar position; perhaps he brings the antidote to all the noise and chaos of modern living, that is distracting us from what is really important in life; our families, our home place; our Irish identities.