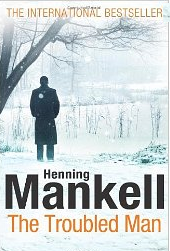 I suppose beginning with the final novel in a book series is not usually recommended, but as this was a book club choice, I really had no option. I had seen the Swedish television adaptation, of Henning Mankell's 'Wallander', which I really enjoyed, so I thought that I could just hop in.  I think my sheer optimism was my first mistake!
The brutal truth is that I didn't really enjoy reading this book, although I can see much to appreciate here.  We have a brooding, melancholic central character in a stark and bleak Swedish landscape.  He deals with the flotsam and jetsam of society, the criminals, the broken, the lost, and each case effects him in a different way.  Although the story is told in the third person, the reader feels like we are inside Wallander's head as he ponders life and death, and re-lives old cases and old love affairs.

In reality, most of the time, he wanders from place to place beating himself up about his broken marriage and his fractious relationship with his daughter.  In this novel, Wallander becomes a grandfather, and so he has another family member to worry and fret about. This ensures that the better-sweet memories he has of being a father is a central theme of this text.
As detective thrillers go, I don't think that Wallander did much detecting; mostly helpful clues in the guise of letters and witnesses turned up out of the blue while other police-officers handed him all the more vital pieces of information.  As for 'thrilling', well I found the book left me more depressed than thrilled, dealing, as it does, with death, old age and saying goodbye to one's youth.  Of course, Wallander's granddaughter does bring new life to the story, but it can hardly outweigh the sheer tonnage of gloom in this book.
One cannot ignore Mankell's highly visual writing style, albeit stark and sparse for the most part. I leave the book feeling as though I have holidayed in Sweden and have enjoyed the odd vodka and glass of wine there myself. Indeed, Wallander spends so much of the novel eating and drinking, that even I was fearful for his ever increasing blood sugar levels.
So, I do not think I will be dashing out to purchase my next Wallander novel, but I can understand why others might want to.  I will be satisfied to join him again on television re-runs, where the faster pace seems to suit this slow-moving detective all the more, in my opinion.