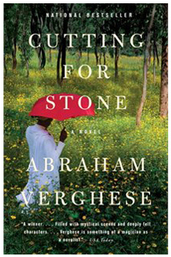 This book would better be titled  'Cutting for Sand', because that is the texture that I am reminded of a day after having finished this book.  There is a grittiness to this novel, a novel that I should have, in theory, loved.  The story is a compelling one: an Ethiopian surgeon is searching for answers about his parents; a British surgeon and an Indian nun.  To add spice to the story, the narrator, Marion Stone is one of a set of conjoined twins, abruptly separated at birth in an attempt to save their lives.  Shiva, the narrator's twin brother, grows up to be nothing like his identical sibling, although they maintain an intense relationship and share many experiences.   Strangely enough, this book has a number of similarities with 'The Twin' by Gerbrand Bakker, which I recently read and reviewed, including, very oddly, a bit about killing a sack puppies with a car!  As you would expect, connections, the choices that we make and the things that make us individuals are central themes in both texts.


And here is the beginning of my difficulty with this book.  At thirteen, the boys become fixated with sex but act upon their desires in different ways.  What I had a problem with was the way in which women were throwing themselves at these young boys, who, although they were tall and lean, were, after all, just boys.  Why would women in their thirties do this?  It seems hardly believable.  I think it was because the author needed to have Marion's life messed-up good and early, so that he could find redemption later on and still be young enough to enjoy it.


One thing I did like was the 'missing' motif that ran through the book.  Indeed 'Missing' could have been the book's title: each character is missing something, a part of themselves, a parent, a loved one... but mostly a parent.  Verghese describes a fragmented society with broken people desperately trying to make themselves and others whole.   As a result, the adults spend all their time trying to find what is lost.  The narrator tells us, at the start of the book, his theory about doctors: they are all trying to heal their own sickness, to make themselves whole again.  This is a very interesting idea, and so every character has some 'lack' that they are struggling with.  Hema, the twins foster mother, is career-driven, until, after a near death experience, she discovers a powerful maternal instinct.  Thomas stone, the twin's father, lost a beloved mother when he was a child and is an emotional recluse as a result.  It is not lost on the reader that the hospital in Ethiopia, where all of the main characters work and live, is called 'Missing', a mispronunciation of 'Mission' which is a very fitting moniker for this motley crew of lost and broken.

“I will not cut for stone,” the Hippocratic oath states,  “even for patients in whom the disease is manifest; I will leave this operation to be performed by practitioners, specialists in this art.”  It seems that the cryptic title of the book, although poetic in its own sense, refers to the act of surgery, in terms of 'cutting' out a kidney or gallbladder 'stone'.  Also, the writer is punning on the name of the main character's family name: Stone.  This is fitting because, ultimately, this is a book about medicine and the life of a surgeon.  I felt like I had gone through a medical degree by the end of this novel.  Every page is full of medical Latinate terminology and consulted the dictionary regularly.  Still, I do not think that this diminished the book's appeal  in any way, but added to it.  It is obvious that the author is himself a surgeon and his passion for his work is undeniable.
I also enjoyed the way the world of Ethiopia was described, through  the senses.  It reminded me of 'Purple Hibiscus' by Chimamanda Ngozi Adichie, with it sights, tastes and smells of exotic Africa.  I felt as if I was breathing the high-altitude air of the mountain city of Addis Abeba, and really felt close to its clever and beautiful people.  Surely that is the true measure of a good book, whether or not it takes you on a journey, and that is something that Verghese easily has accomplished.  As an Ethiopian, living in America, we can sense the love of his native country, despite the poverty and violence there.  We follow the narrator as he travels to New York, straight from a war zone, and it is shocking to see the difference between the developed and developing worlds, and very disturbing too.

Thematicallt, this  is a book about men and their relationships with women; how they adore their mothers, fall in love, and how they deal with sex.  Central to the plot is how people can be haunted by their relationships with their mothers.  The most heart-breaking image in the story is of four year old Marion Stone, sitting on his mother's chair, wrapped in her cardigan, in the operating room where he was born, and his mother died, calling to her to come for him.  'When are you coming mother?', he quietly asks.  The mother-son relationship is at the heart of this book and all other relationships with women dwindle in comparison.  The women in this book suffer greatly and it was one thing I had difficulty with.  So many of them are brutalised and mutilated, but none more than Sister Mary Joseph Praise as she gives birth to her sons.  I wonder why Verghese treated this angelic, beautiful character in this way?  I am sure he wished to create a martyr out of her, but the violent nature of her demise was too extreme in my view and quiet out of the middle ages in its barbarity.   And so you understand why this book reminds me of the texture of sand: it can be pleasing to touch, but it just lingers on, annoyingly, between your toes, and in your teeth, spoiling any initial pleasure.  With his depiction and destruction of women in this text, Verghese took 'Cutting for Stone' too far at times and crushed it to the consistency of sand.  I recommend this book but add a proviso: not for the squeamish or those that cannot abide the sight of blood.
Posted by My Book Affair at 06:51