'The World of Downton Abbey' ~ by Jessica Fellowes 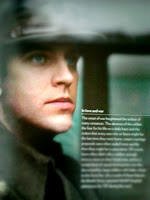 There is something about Sunday nights that makes me long for a proper period drama.  If, like me, you were enthralled by the epic drama 'Downton Abbey, and are still suffering withdrawal symptoms, then I think I have found something that might help you. 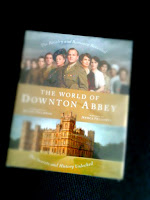 The niece of the talented Julian Fellowes has written a beautiful book to accompany the series that was so cleverly created in the style of 'Gosford Park', the movie that won him his Academy Award for Best Original Screenplay back in 2002.  While Julian Fellowes writes the book's foreword, this is not a book about the making of the series, although there are some photos showing camera crew etc.  This, on the other hand, is brimming with information about the Edwardian period.  With clippings from contemporary magazines and sketches of the time, we can see how the show's costume designer Susannah Buxton, dressed the three sisters, their mother and aunt to suit the period.  It is so delightful to learn that Lady Mary actually wore a dress that had been worn by Lucy Honeychurch in the film, 'A Room with a View' and that some of Sybil's dresses were actually vintage. 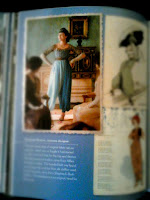 We also learn a little more about life below stairs and are given entire lists of duties for servants, the likes of Mrs Patmore, William and Mr Carson, for example.  The piece entitled, 'A Day in the Life of Daisy', is certainly an eye opener, lasting from half past four in the morning, until about 10 o'clock at night.
There is an interesting section on running a big house and estate like Downton, with delights such as detailed descriptions of the interior decoration of various rooms in the house, and the rules of inheritance for such estates, which has been the source of so much drama in this period piece.  One of the most interesting sections of the book was the one which dealt with Highclere Castle, the real Downton Abbey, where the dramatisation is set.  We learn that it has many things in common with the fictional Downton, in that the estate was saved by the fortune's of an American Heiress, and was even used as a military hospital during the First World War.
There is an entire chapter in the book dedicated to Romance, and each of love story is touched upon, but let's face it, it is the story about Mary and Matthew that has us enthralled.  Let me quote from the book, and you can make up your own mind about what the future might hold in store for our young lovers: 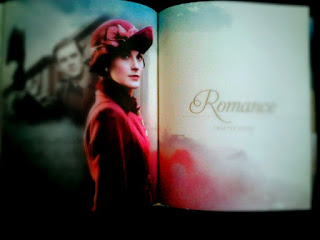 'When Mary and Matthew Crawley finally kiss, it seems that their complex relationship has at last found a resolution.  In that moment they certainly intend to be together.  However, the complications of their situation, from the expectations of their families to the issue of class... mean that the conclusion to their story is, as yet, far from being reached.'
Now, what is that supposed to mean??  Of course they will live in happiness ever after Mr Fellowes... or you will have me and thousands of other Downton fans to answer to!

So, for those who would like to know a little bit more about the characters in the book and the type of life that they lived, this beautifully produced, sumptuous book is the perfect thing for that Sunday evening feeling, until the real thing returns to our screens in the autumn.
Posted by My Book Affair at 20:50

I NEED this book. I miss Downton awfully and cannot believe we have to wait so long for another season. :(

It is just sooo beautiful. Just 16 Euro from The Book Despoitory, including postage. Not bad for a high quality, glossy hard back!