Patrick Kavangh and the Poetry of Place. 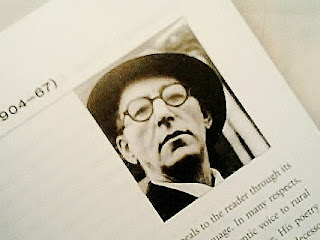 In many ways, Patrick Kavanagh is a quintessential Irish man, but it is his obsession with land, and the geography of place, that confirms his Irishness for me.
Consider some of the titles of his most famous poems, like 'Inniskeen Road...' and 'Shancoduff'. It seems that place is vitally important to him, that Kavanagh's imagination is inherently tied to his place of birth.  But isn't this typical of the Irish mentality?  Hasn't our entire economy been brought to its knees over a property crises caused by our national obsession with owning land?   And on a cultural level too so many of our best writers have equally been enthralled with an Irish sense of place - be it in story form, like James Joyce's 'Dubliners', or in verse, like W.B.Yeats's 'Lake Isle of Innisfree'.  Place is indeed at the forefront of our creative imaginations.

Yet, for Kavanagh, it seems especially so.  He finds a certain security in naming the landmarks and pin-pointing the exact locations of his imagined self as he muses on his themes.  Indeed it gives the reader a sense of comfort to know that 'Cassidy's hanging hill' ('A Christmas Childhood') is nearby or that 'A yellow sun reflects in Donaghmoyne', ('The Great Hunger').  It is as if Kavanagh's creative imagination has a built-in G.P.S. system that inspires and helps him to find his bearings.  And we the readers are glad of it too; it gives a solidity to his poetry that is sometimes elusive in that genre.

One might be of the impression that Kavanagh is essentially a rural poet, associated only with the landscape of his beloved Monaghan.  However his 'Canal' poems put pay to that theory.  He was clearly inspired by the man-made water scheme in Dublin city and found much in that landscape to symbolise his sense of rebirth after his brush with death in 1958.  His poems, 'Canal Bank Walk' and 'Lines Written on a Seat on the Grand Canal, Dublin', are two poems that are deeply rooted in a sense of place, for it is the location of this little oasis in the midst of Dublin that so captures the poet's imagination.  He describes it as 'an unworn world... of fabulous green... pouring redemption for me'.  ('Canal Bank Walk').  So enraptured is he by its power that he asks, in a very Keatsian way, to be commemorated there when he dies: 'O commemorate me where there is water, Canal water...' (Lines Written on a Seat...').  And the good people of Dublin City Council listened and placed a life-sized statue of Kavanagh, sitting on a canal bank seat, just as he requested, beside the canal where he had been so inspired in life.  How fitting that a poet who was so intrinsically connected to a particular location in the city should be forever represented there in such a physical way.

And when considering Kavanagh, and his childlike attachment to place, we cannot fail to mention perhaps his most famous contribution to Irish culture: his lyric to the song, 'On Raglan Road'.  Immortalised by the carousing vocal of Luke Kelly, this song of lost love and opportunity names a street in Dublin where Kavanagh once lived.  The cyclical, repetitive melody of this traditional tune, 'The Dawning of the Day', has an intrinsically melancholic feel that echoes much of the atmosphere of Kavangh's poetry and so it is no mystery as to why he selected this particular air to lyricise.  The poet continues in the verse to add a second location, 'Grafton Street', which is in the heart of Dublin city and is a great hub of social life, close to where young people traditionally gather and where Kavanagh spent many a night drinking 'on the town'.  In a way, the poem could be called 'On Grafton Street', being as it is the more celebrated of the two Dublin streets, where it not for the the lack of euphony in the phrase that is obviously present in the preferred titled.  Still, it is entirely fitting that Kavanagh should be so remembered in the public imagination, for writing a lyric about an actual place, where a real street is immortalised. As such, the song is a true testament to the style of a poet, who was happily obsessed with his Irish identity and the geography, and poetry, of place.