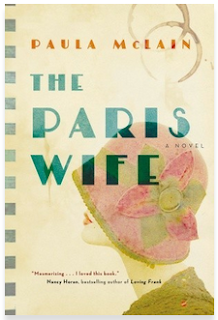 Rage, rage and more rage... for Hemingway, his wife and me.
'The Paris Wife', by Paula McLain, is like a slow growing hurricane: its passion builds and builds until you find yourself being carried away by its characters and finally deposited a long distance from where you originally started, feeling battered and bruised.
It is a story of the courtship and marriage of Hadley Richardson and Ernest Hemingway, the acclaimed novelist and self-proclaimed hero of modern American literature.  It follows the life cycle of a love affair, from the heady first days, to the post-mortems and as such should come with a health warning.  Let the broken-hearted everywhere beware!  We are taken down the road of break-up and recrimination and while Mrs Hemingway, the narrator, may not feel anything close to hatred for her ex-husband, the reader certainly does.  Like her, I fell in love with Hemingway in those early chapters and even ordered myself some copies of his novels to enjoy, but by the book's end, I found myself cursing the man.  Like I said - this book is all about rage, the good sort and the bad.


The book also made me long for Paris, its cafes and art galleries, its classic architecture and damp rain.  It made me yearn, too, for a writer's life and giving myself totally to a work of art, at the expense of health, wealth and everything else.  But who can live like that?  Ernest Hemingway certainly could and did.   The candle burned at both ends for this writer, giving a dazzling light that attracted its own set of fireflies and moths.  Yet, people cannot live like that for long, burning up everything and everyone in their path; old lovers and friends, family and patrons.


It is no mystery why 'The Paris Wife'  by Paula McLain is so popular with book clubs the world over for it leaves the reader with more questions than answers.  One of the main questions is, should someone be excused bad manners and cruelty just because they are an artist?   If so, then is meanness and infidelity only allowable if the artist is an extremely talented artist, or is every artist, be they Noble Prize winning or derivative and full of hot air, allowed such moral poetic-licence?  It makes me wonder about the true legacy of a person - which should be most celebrated, that you were a good writer, or that you were a good person?  After reading this book, I have to admit that Ernest Hemingway, despite being a gifted author, was a selfish, self-obsessed, childish man, whose ego knew no bounds, and who clearly had a problem with women.   By the end of it, I wanted to reach into the pages, grab him by the neck and strangle the man, but that is one pleasure, thus far, denied to an eager reader.  (You see... more rage!)


The way Mclain tells it, Hemingway was almost a victim of a preconceived ambush - that Pauline Pfeiffer effectively waylaid the author and he was helpless to stop it happening.   It reminds me of some of the other first wives of successful artists: Cynthia Lennon, especially, comes to mind, a young wife and mother, abandoned very publicly by her husband and then by his entire entourage.  And what about Ann Hathaway, William Shakespeare's wife, who, like Hadley was also some years senior to her husband, and was abandoned by him in Stratford while he searched for fame and fortune in the playhouses of London.  Even the great romantic, Charles Dickens was not immune, leaving his once beloved wife, Catherine Hogarth, after she bore him ten children, for an 18 year old actress, Ellen Ternan.


Why is it that so many of our greatest artists seem to outgrow the women they loved before they were famous?  Don't we see the same scenario playing itself out repeatedly in the lives of Hollywood celebrities?  In some of these cases there is not much artistic talent to speak of, but considerable fame and attention.  And so I conclude that it is the ego of the artist, and not their level of brilliance, that makes marital success, or mere monogamy, so elusive. 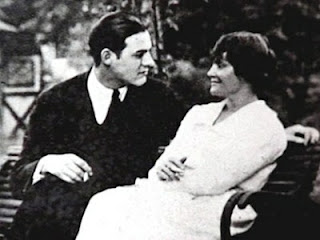 Even James Joyce, the writer who seemed to understand so intimately the working of a woman's mind, managed to be unfaithful to his mistress and muse, Nora Barnacle.  Their marriage 25 years later seemed to make no difference to their relationship and affairs with other women continued.

But this is not saying much of McLain's book itself.  It is a great piece of historical fiction, written as Hadley Richardson's memoir.  She makes an endearing narrator, although we occasionally see life from Hemingway's perspective and hear private conversations that Hadley would not have been privy to.   McLain brings their story to life as she imagines the conversations and situations that the couple found themselves in.  It seems that the essence of the Hemingways' relationship has entered into the very fibre of this text: their passionate, hunger for life; exhausting, exhilarating and extra-ordinary.  The text is light and the dialogue full of witty, American slang that was so popular in the 1920s.  Hemingway comes across as larger than life, his smile once described as spreading from his face and reaching every part of his body.


The interesting thing is that Hadley writes her memoir in the same style as her husband; with pure, unadorned language.  Similarly, their world, like Hemingway's prose, is simple and clear, no frills, no unnecessary clutter.  Their home in Paris is scantily furnished and bare. They eat simply, sausage and potatoes being a favourite dish, and even their clothes resemble those of plain, working folk: baggy trousers and cotton shirts.  As their surroundings become more sophisticated, and they mix with the rich and beautiful, so too do their lives.  Finally, everything becomes so complicated, it is unbearable and, as Yeats said, 'The centre cannot hold'.

It is clear that McLain is a published poet as the novel is full of visual symbolism. When Hadley is at her lowest, feeling trapped and confined, beside her is a canary bird, caught in its cage.  There are other references to caged birds in the novel too.  If Hadley is represented by a caged bird, then Ernest is best symbolised by the charging bull that he loved so well; a huge physical presence, passionate, raging, wild.  At one point in the novel, the entire male entourage begin to adopt bull-like personae, squaring up to one another and challenging their friends to fight over a particularly beautiful girl.  The entire scenario would be laughable were it not for the pain it causes the women in the group. Yet, one of my favourite symbols in the text is the moment when Hadley finally realises that her marriage is over, and she watches the walls of their son's sandcastle crumbling into the sea.  This tiny cinematic detail captures the tragedy of divorce so beautifully, when a home is wrecked irreparably and all security for the family unit is lost.

The structure of the book has the symmetry of a poem too, with images from the beginning of the novel echoing through to the end.  Consider when Hadley and Ernest first kiss, he calls her a coward and bids her to jump off the top of a sand dune and when she does, he takes her in his arms and kisses her passionately.  On the day when she finally snaps, having had enough of his infidelity, he calls her a coward, telling her to dive into the water below.  This time she does not dive in.  There are so many clever, symmetrical echoes in this book, with mirrored stories of fathers lost and women abandoned, that you cannot help but smile.

This is a book to take your time over and enjoy, although your desire to discover how it all ends with have you devouring the pages in the all-or-nothing fashion of the Hemingways.  But be prepared to be shaken by this text, by the questions and the doubts it will leave you with, on the nature of love, fidelity and matrimony, and the eternal differences between the male and female of the species.
Posted by My Book Affair at 23:48

One of my book club members recommended this. I hadn't really read much about it but now I'm really looking forward to it! I've got another Hemingway book on my horizons soon so this will be a great accompaniment!

So true, as well as despising him, I sort of yearned for the "room of ones own" to write in.

Yes, it seems that one Hemingway book is never enough... just like the man himself... more is more in all things Hemingway! I think I will give 'A Moveable Feast' a try, as it gives his point of view on the Paris years. Nice to think that he was thinking about this period just before he died.... least he could do!

Yes Lucy - he was always able to find a room to write in, regardless of how poor they were - although a piano was not deemed to be a necessity for Hadley. Why is it that men always seem to find a room for themselves... the garage, the study, the den. Virginia Woolf was so right about that and how horrified she would have been to find that nothing much has changed in a hundred years.