To be Sung Underwater ~ Tom McNeal 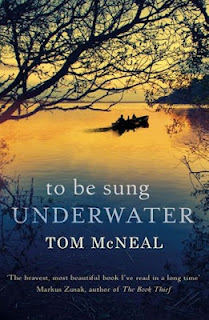 If it is a great summer read that you are looking for, then look no further than 'To be Sung Underwater', by Tom McNeal.  It tells the story of Judith Whitman, an unhappily married mother of one who suddenly does not feel that she belongs in her own house any more.  Her family has outgrown her, her husband is having an affair, her teenage daughter is embarrassed by her.  So, she sets up home in a storage facility and makes up a new identity for herself.
I suppose we can all relate to the desire to disappear for a while, to our own private sanctuary and in this way, the book reminded me, favourably, of Anne Tyler's 'Ladder of Years', with escape and the need to be visible being central themes.  Here Virginia Woolf's notion of a room of one's own takes on an urban, modern feel, as Judith literally recreates her teenage bedroom, complete with her old furniture and quilt, the very place where she lost her virginity some 28 years previous.
This of course gets her reminiscing about her first love, Willy Blunt, who thought her 'dangerous' when first they met.  In a series of erotic flashbacks we watch their story unfold, during a summer full of secret rendezvous in out of the way places.

The sexual awakening of Judith Whitman is beautifully dealt with and this is just one of the many reasons why I was so surprised to realise that this book was written by a man.  He really describes the world exactly as seen from a female point of view, be it Judith's tender affection and loyalty to her father or the abrasive, railing against her mother.  The child of separated parents, it is difficult for Judith to see the bad in her father, allowing in him the sexual freedom that she despises in her mother.  The irony is, of course, that Judith herself is no prude, although she expects her mother to be one.

As such, the novel is a close study of how mothers and daughters interact.  Firstly we see how Judith and her mother have incompatible lifestyles, the daughter being shocked and embarrassed by her mother's partying when her marriage breaks up.  However, when Judith begins the steep decent into her own mid-life crises, the parallels between her teenage self and her own daughter are all too evident.  The only permissible intimacy between them occurs when Judith dares to kiss her daughter's ear as she lies sleeping.  The sadness of this should devastate Judith, but she too has moved on.  So, McNeal has drawn a plot that comes full circle: as a daughter she pushed her mother away and as a mother she in turn is given the cold shoulder.

Yet, as the circle turns, Judith learns how it feels to become an outsider when her daughter and husband grow closer and begin to exclude her.  So, Judith ultimately becomes more like her mother, which is something that every adult can relate to, despite our protestations that that will never happen to us. Such echoing through the generations, is fascinating to read and makes this book an incredibly enjoyable read.

Yet the book also considers the relationship between daughters and their fathers.  It seems that Judith's relationship with her father only develops fully when her mother has been left behind and her parents separate.  In a scenario that would have pleased Freud greatly, she becomes the main woman in his life, or so she thinks.  She accepts his strange foibles and his sexually appetite for younger women, because he is her father - totally irreplaceable. Indeed, their relationship is the most important of her life and the flashbacks deal with her love for her father as much as her love for her old boyfriend.

He is an English professor and this enables McNeal to reference many classic novels and their characters, such as Elizabeth Bennett, from 'Pride and Prejudice' and Isabel Archer from 'Portrait of a Lady'.  This sometimes can be very off-putting in a novel, but not so here.  In capturing the adolescent mind, McNeal depicts Judith imagining herself as a character from a classic novel, which is very much in keeping with the pretensions of a teenage girl on the brink of  adulthood.  It added to the realism of the story and made me want to read more Henry James! 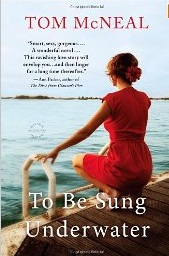 McNeal also writes incredibly witty dialogue, which would translate into a wonderful film script.  Everything Blunt says is clever and entertaining, which is one of the reasons why he is such a compelling and downright attractive character.  This, actually, is one of the flaws of the book - Willy's charm.  He is so charming in fact that is unfathomable as to why Judith could bring herself to abandon him and marry another man.  Foolish the girl who married Malcom, with his million, instead of William with broad smile and grey eyes!

So, considering all the references to Lizzy Bennet, it is possible that McNeal is considering what if Elizabeth Bennett regretted marrying Darcy after all.  Would she have wondered what if?  I think not - Wickham and Mr Collins have nothing in common with the charming Mr Blunt.  It applies better to Isabel Archer, a girl who receives multiple proposals and marries a vile, devil of a man in error.  Yet, in a modern society where numerous partners are now the norm, McNeal is tapping into our tendency to wonder 'what if' and to look nostalgically behind, at past lovers, when future relationships are too exhausting to contemplate.
This is a fine novel, erotic, fun and thought-provoking.  It will leave you digging out your old phone book and searching for old lovers on Facebook.  What you do if you find them is your look-out, but I recommend you read this book before picking up the phone and saying hello!