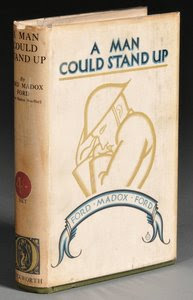 This novel, the third in the Parade's End series, begins and ends on Armistice Day.  The rest of the book follows Valentine as she considers whether or not she should become Christopher's mistress, and Tietjens' experience of life at the Front. There, his mind jumps back and forth, dealing with the past and imagining a future with Valentine.  He becomes Officer in Command of a fine regiment of 'pals' and proves himself to be a capable leader of the men.  He worries that he is like Hamlet, unable to make a decision regarding Valentine, but ultimately he takes a stand.

This brings me to the title of the book - 'A Man Could Stand Up' which, as a metaphor for Teitjens' situation,works cleverly on many different levels.  Firstly and foremost it refers to the idea of an Englishman standing on a hill back home, enjoying the view.  Once, Christopher was such a man.  However, in the trenches, the last thing a soldier can possibly do is stand up on a hill; it would mean certain death.  As such, the image becomes a symbol of unattainable dreams, something forbidden.  Christopher longs to climb atop the trench and take in the view, just as he longs for a life with Valentine.  It later reflects the idea of being brave, of taking a stand against those who rob you of your reputation, rightful glory and inheritance.  It seems that all of Christopher's old friends have set out to steal either some or all of these things from him.  Sylvia, McMaster and General Champion, have combined together to undermine Tietjen's position, until he is virtually buried alive under their accusations and fabrications.  Christopher finally says:


'  "You want to stand up! Take a look round..." He struggled for expression: "Like as if you wanted to breathe deep after bein' in a stoopin' posture for a long time!" .'

He has been maligned and taken advantage of for too long.  It is time for him to put himself first.  Indeed, this realisation comes in a literal blast of realisation when he is blown up in the trench and half buried alive with a fellow soldier.  He tells his hollering comrade that he cannot come to his aid until he has helped himself first.  It is time for him to walk on that hill, like he did that morning with Valentine, to show the world that 'a man could stand up'.

Through the character of Christopher, the author makes numerous observations about war; suggesting that the soldiers do not really wish any serious harm to befall their fellow soldiers, even if they are on the other side.  They do not hate them.  Instead, their hatred is aimed at those back in London who care little for the men at the Front: frustrating their efforts and at times even denying them sufficient food rations. He describes the blind terror experienced by these brave soldiers, as the thick noise surrounds them, making the earth itself shake:


'In the trench you could see nothing and noise rushed like black angels gone mad; solid noise that swept you off your feet... Swept your brain off its feet. Someone else took control of it. You became second-in-command of your own soul.'

But they do not shirk from their duty but maintain their position because it is what is expected of them.  This is the most impressive thing about the novel; its depiction of life in the trenches, especially because the author lived through it himself.  How can the world forget the terror that these men lived through as millions of men faced each other on the battlefields?  Because of Madox Ford, at least some will remember.


It is amazing then that Madox Ford manages to add any beauty at all to the book.  Usually, the beauty is associated with Valentine.  Tietjens thinks about how 'she made the sunlight', and decides that he will forgo his position at Groby, his former life and friends, even the fine claret at the club, to take her as his own.  He says that when he remembers her, he recalls her mind.  Her physical body is not the inspiration of his love.  He longs to talk and talk and talk some more with her, as theirs is a meeting of minds and to do that would mean that they must live together.
As with the other books, there are moments of pure romance when this soldier turns his mind to Valentine.  Despite being snubbed by his general and being denied his Victoria Cross, Tietjens maintains his steadfast belief in the goodness of Valentine Wannop.  Even when they are thrown together by the wicked machinations of Edith McMaster or when Mrs Wannop pleads with him to think again about her daughter, he decides to stand up, to step out of the shadow of the old world, out of the hole that is duty and honour and take her by the hand as his chosen partner in life.


Finally, I must mention the wonderful visual descriptions in the novel that come rising from the darkness of war in so unexpected a fashion, that the reader is left gasping.  One such idea is when Tietjens notices the movement of swallows amid the chaos of battle:

'So myriads of swallows pursued him, swirling round and round him, their wings touching; for a matter of twenty yards all round and their wings brushing him and the tops of the thistles. And as the blue sky was reflected in the blue of their backs--for their backs were below his eyes--he had felt like a Greek God striding through the sea...'

Christopher is inspired by these brave little birds, who, being disturbed from their nests by the barrage of the big guns, fly to face the Germans, challenging their right to destroy.  Even the birds stand up for themselves, and so Christopher's course of action becomes clear.   He makes his decision:

A delightful irony is revealed when Tietjens admits that 'Fortunately, there was the heir... Otherwise he could not have gone with that girl!'.  How wonderful that the pregnancy-lie used by Sylvia to trap him, is what ultimately frees him and allows him to live with his beloved Valentine.  Such symmetry in this collection of novels  makes them all the more satisfying, and at a little less tragic somehow, to know that Teitjens will, in fact, never bring Valentine to Groby.

Email ThisBlogThis!Share to TwitterShare to FacebookShare to Pinterest
Labels: A Man Could Stand Up Ford Maddox Ford Parade's End book 3, Life in the trenches, World War One