The Dinner ~ by Herman Koch 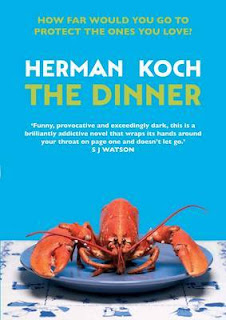 One might be forgiven for thinking that this book is merely about food and dining out.  While Dutch author, Herman Koch's novel, 'The Dinner', does spend a lot of time considering those arts, the book is primarily about families; what keeps them together and what rips them apart.  The title refers to a seemingly innocuous meal in a restaurant attended by two brothers, Paul and Serge Lohman and their respective wives, Clare and Babette.  However, as the plot unravels, we discover that they are meeting to discuss a problem with their sons.  The teenage cousins have broken the law and bit by bit the true horror of their behaviour is revealed to the reader.  Yet, the really disturbing thing is how the parents react to their sons' behaviour; how they cover up for the boys and defend their actions.

As such, this is a book about deception.  Almost every character, we discover, is not as we expected them to be.  It is most unsettling for the reader, but deeply compelling.  We dread what may be coming, but we cannot help but be enthralled.  After all, the situation is something we can all relate to: family loyalty.

Kock seems to be considering how we can never really know someone, even those with  whom we have the closest bonds.  Even the narrator, Paul, is questionable.  We think we can trust him, but even he is capable of shocking the reader with his opinions and behaviour.  It is unsettling, and is meant to be.  It emphasises the author's fascination with trust and supports his idea that you can never be certain about other people; everyone is capable of deception.

The novel begins with the mundane details involved when going out to dinner.  Paul helps his wife choose what to wear, is careful to order the right food from the menu and not to arrive too early.  Just when we think it was a bad decision to start reading the book, the truth behind the meal comes to light.  It is tantalising.   From there, the plot continues to get more and more involved, until you feel as much a part of the story as the parents who face the extraordinary dilemma before them.
Koch is also contemplating how blood is thicker than water.  This idea is most apparent when we consider the character of adopted boy Beau, whose position in the hierarchy of the family is different from blood relatives.  Although the adopted parents claim to love this African boy every bit as much as their own children, when push comes to shove, in an extreme situation, wouldn't the security of their birth child take precedence over the adopted child?

This is just one of the many questions prompted by this book.  In a way, the novel is actually about society and takes a probing look at the justice system, our morals and social bias.  Vagrants, sufferers of mental illness, paedophiles, cancer patients, politicians, mothers, fathers and sons all come under the microscope of this writer.  Is one life more valuable than another?  Isn't it the duty of a parent to protect their child?  Where should a parents duty lie when to do the right thing means relinquishing one's duty to one's child?  As the author takes the characters through these questions, the reader is forced to put themselves in the shoes of the offenders and their parents and made to consider:  what would I do in such a situation.

There is also the question of genetics and how children inherit so much from their parents.  Koch makes you wonder; if we could predict that our children would be born with a tendency to break the law, would we choose to terminate them in advance?  We are also forced to recognise that the behaviour of children is often directly related to the manner in which they were brought up and the example that their parents showed them.  Here we can see a direct correlation between Paul's violent tendency and his son's.

Time and time again Paul showed his son bad example, how people could be physically threatened  into submission.  As always, the parents are to blame, not only because they neglected to teach their children  right from wrong, but that they were genetically poorly programmed from conception.  This nature-nurture debate is at that heart of sociology and Koch cleverly forces us to consider these huge themes while keeping us on the edge of our seats.

Of course, I got it wrong.  This is not a simple book about a meal in a restaurant, but a book about society and the limits of decent behaviour when faced with the destruction of familial happiness and security.