The Girl You Left Behind ~ by Jojo Moyes 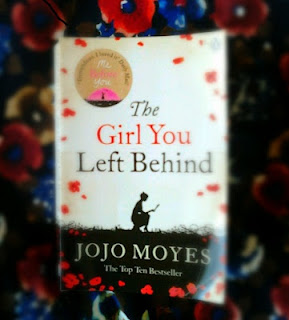 I've just spent the last 24 hours immersed in 'The Girl You Left Behind', by Jojo Moyes, and I feel just like you might expect to feel, having been pulled between two different centuries... stretched and somewhat dazed.
The first quarter of the book is set in France before and during World War One, and follows the life of Sophie Lefevre, whose husband Edouard is away fighting at the front. She lives with her sister Helene and her children and their brother Aurelien, in a small hotel that they run together, both women waiting and longing for their husbands to return.  Edouard Lefevre is a talented painter and it is the portrait that he paints of his wife Sophie which is the link that joins the past to the present day and gives the book its title.
The rest of the book follows the painting's new owner, Liv Halston whose husband David gave it to her on their honeymoon.  Now a widow, Liv clings to the painting as a reminder of her dead husband and when the artist's family request to have it returned to them, believing that it to have been stolen by the Germans during the war, a hard fought legal battle commences to decide who is the rightful owner of 'The Girl who you Left Behind'.

Of course, love is a central theme in this book, as both Sophie and Liv consider what they are prepared to sacrifice for love.  Yet, for me, what is really interesting  about the book are the scenes describing life in occupied France during World War One.  Here we get a glimpse of what life was like for the French women who kept the home fires burning (if they were lucky enough to have wood!) while their men fought at the Front.  You were completely at the mercy of the German soldiers, who could commender your every possession for their own use, take the food from your mouth if they so desired, or dragged you from home in the middle of the night just because they did not (or worse still, did) like the look of you.  As in all conflicts, it is the women and children who are most susceptible to threat.  Moyes captures this vulnerability brilliantly in the novel. And the threats do not just come from the enemy.  Jealous neighbours are more than capable of terrorising their fellow citizens, especially when hunger grumbles in their stomachs.  The feeling of hunger pervades every page of the French section of this book, and I was more than grateful to eat some fresh white bread this morning, having read repeated descriptions of sticky, black bread, too hard to cut and too disgusting to eat.
For some reason, I kept forgetting that the book was set in 1916 and found myself imagining the year was more like 1940.  The events that we are witness to in this book appear reminiscent of the labour camps in Poland during the implementation of Hitler's Final Solution.  People are packed into trains and denied their basic human rights, old women are shot in the street to terrorise and humiliate whole towns into submission, women are punched in the head with rifle butts for showing less that expected courtesy to German soldiers and yet there is not a Swastika in sight!
It makes it all the more bizarre to consider that the French, and the rest of the world, allowed this horror to happen all over again a generation later.  The brutal suffering of central characters was quite disturbing, although enlightening, and almost made me stop reading.  But then, there is often little human kindness in times of war.  I am certainly glad that I read on.
The title of the book seems a little forced to me, and by that I mean it does not really sound like the name of a painting.  Thematically though, it suits the novel very well as there are so many girls left behind in this book.  Sophie and Helene are both left behind when their husbands leave for the Front, while Liv can also be so classed when her husband David dies.  The 'you' of the title could also refer to the German Kommandant who falls in love with Sophie and the painting during the occupation, or to Paul, Liv's new boyfriend, whose job as the investigator of the art theft means that he and she are on opposite sides of the legal battle. Yet, there is another younger girl who is left behind, and that is Edith Bethune who is cruelly separated from her mother in one of the most heartbreaking scenes in this book.  Perhaps the novel title ultimately refers to her?  You will have to read the book to discover the answer for yourself.

Email ThisBlogThis!Share to TwitterShare to FacebookShare to Pinterest
Labels: France World War One, historical novel, split narrative, the Girl you left behind by Jojo moyes