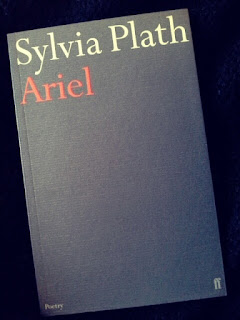 It is the eve of St. Valentine's Day and I have been dreaming of Sylvia Plath. She died fifty years ago this week, on February 11th, 1963. One cannot help but note the poignancy of the date; how this poet, who wrote so much about the affairs of the heart, should die so close to the feast of St. Valentine.  That Plath suffered from mental illness all her life, is undeniable, but the unique way she looked at the world was also her gift. In her final book of poetry, published two years after her death, Plath deals with many issues, but somehow, she keeps returning to one theme: love.

'Ariel' is an outstanding publication, beginning with one of my favourite Plath poems, 'Morning Song'. In this poem she celebrates the love between mother and child, and those precious moments of bonding in the early months of a child's life.  What a fitting poem to begin a collection. But Ted Hughes, Sylvia's ex-husband and renowned poet, must take the credit for that, as it was he who collected Plath's poems together, arranged them and oversaw this posthumous publication in 1965.  Other poems such as 'Nick and the Candlestick' and 'The Arrival of the Beebox' deal with a similar theme.  Hughes fittingly dedicated the book to their children, Frieda and Nicholas, knowing, I am sure, that Plath would have wanted it that way and recognising that these poems read like a long goodbye letter to her little ones.  Image after image helps to unravel the inner-workings of their mother's mind, a gift to any bereaved child.

How extra-strange it must have been then for Hughes to see his wife's genius leap from the pages of these poems, recognising, finally, that she had perfected her voice as a poet, and earned her place on the world stage of writers.

Plath was nothing if not a personal poet, her poems drip with minute details of her life and on reading her biography, the reader can appreciate the poems all the more.  The breakdown of her marriage to Hughes is well documented and one cannot help but think of him when we read the poems in this collection.  He so often is a real presence in them, casting a long shadow of regret and unhappiness cross the page. As often, in matters of the heart, love and anger are often intimate bed-fellows. In poems like 'Elm' or 'Poppies in July', she speaks of pain and sorrow, and we think of lost love and Ted Hughes.

The collection also contains poems about Plath's complicated relationship with her father, 'Daddy' being the most famous of all. In this poem she rages against her father's ghost, for abandoning her when he died. Love here is inverted, and we can measure how much she loved her father by the utter devastation she feels at his departure.  The irony of course cannot be lost on us as readers, considering how history repeated itself for Plath's own children.

'Ariel' ends with a poem entitled 'Words' and again we must praise Hughes for this editorial decision, because, ultimately, all that remains of a poet when she is gone, are her words.

She writes, 'Words dry and riderless, the indefatigable'.

Like Shakespeare, Plath seemed acutely aware of the legacy she was leaving behind in her work, and perhaps she found some comfort in that thought during her final days.

But as it is the season of the Valentine, and the anniversary of Plath's death, let us consider how Plath lived and loved with passion. She was the candle burning at both ends, beautiful and fierce to behold, yet bound to burn out all the sooner because of that. So let us end, as we should, with Plath in her own words:

Letter in November
by Sylia Plath

Love, the world
Suddenly turns, turns colour. The streetlight
Splits through the rat's tail
Pods of the laburnum at nine in the morning.
It is the Arctic,

This little black
Circle, with its tawn silk grasses -- babies hair.
There is a green in the air,
Soft, delectable.
It cushions me lovingly.

I am flushed and warm.
I think I may be enormous,
I am so stupidly happy,
My Wellingtons
Squelching and squelching through the beautiful red.

This is my property.
Two times a day
I pace it, sniffing
The barbarous holly with its viridian
Scallops, pure iron,

And the wall of the odd corpses.
I love them.
I love them like history.
The apples are golden,
Imagine it ---

My seventy trees
Holding their gold-ruddy balls
In a thick gray death-soup,
Their million
Gold leaves metal and breathless.

O love, O celibate.
Nobody but me
Walks the waist high wet.
The irreplaceable
Golds bleed and deepen, the mouths of Thermopylae.