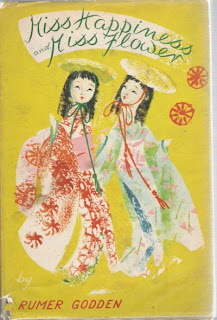 'I've got a doll's house.... do you want it?'  I couldn't believe my luck when I went to collect a beautiful doll's house that my good friend and neighbour was trying to find a home for.  It just happened that I had a little girl who would love such a perfect home for her collection of dolls and figures.

I felt that a book was needed to inspire my daughter on the wonders of playing with a doll's house.  Now would be the perfect time for 'Miss Happiness and Miss Flower', I thought,  Rumer Godden's children's book published in 1961; one of the most magical books there is on the subject of dolls and their houses.

The plot: a girl from India comes to a strange land to live with her aunt and cousins. Nona Fell is lonely in this chilly English village, and feels out of place.
But just then, she is given a set of Japanese dolls, to share with her spoilt cousin Belinda.  The arrival of the dolls transforms her relationship with her environment and her relatives.  The entire family, with the exception of Belinda, join together to help make a Japanese doll's house for the dolls, Miss Happiness and Miss Flower.
That is the story.  It is simple, but what is so charming  is how the dolls speak for themselves in the narrative.  We hear them talk to one another, learn of their anxieties and feelings, although the humans never do.  In this way the book enters into the child's world of play, echoing how children the world over interact with dolls, giving them a secret voice of their own.
Just as enchanting are the descriptions of the Japanese doll's house, as it is planned and slowly comes into being.  The tiny tea cups, the paper sliding doors, the minute cushions and side tables, made me want to grab some four by four and get hammering!
This was a perfect read for myself and my daughter, but really, this could be a great read for dads and sons too.  One of the real heroes of the book is Tom, the kind cousin who builds the house for Nona.  If ever there was a book to inspire DIY, this is it.
But luckily, thanks to my dear friend Sarah, my lucky daughter has her own beautiful doll's house, perfect and finished,  just waiting for little figures to fill the rooms with fun and laughter, and her days with happy hours.
Posted by My Book Affair at 12:21 1 comment:

The curtain just seemed to evaporate and John Hurt was suddenly there.

I've just returned from a visit to The Gate Theatre in Dublin, having seen John Hurt perform in Beckett's wonderful, short play, 'Krapp's Last Tape'.  A friend once said to me that there are special times when drama on stage is just magical, and this was one of those times.


The play shows  Krapp, an old man, returning to tapes that he has recorded throughout his life, recounting experiences, much in the same way as a diary.  The voice on the reel to reel recording sounds younger and is full of bravado about future plans and the good choices that he has made.  To the older Krapp, now listening to the tapes, the younger Krapp on the recording is foolish and has made many mistakes.
The premise is simple, yet, as always with Beckett, there is much going on beneath the surface and even more questions are asked than answered.
You are left wondering, why would someone spend so much time recording the events of their life instead of going out and living it?  But then, isn't that what we all do every time we write a diary entry, a poem, or even take a picture?  I knew a man once, who made countless audio tapes about his life.  When he died, they were just discarded on a rubbish heap; no one ever got to listen to them.  It still saddens me to think of it.  I didn't rescue them to have a listen, feeling I would have been prying nosily, and also believing, that once I started to listen, I would be compelled never to stop.
Aren't our own memories loud enough, ringing eternally in our own ears?  Do we really need other people's memories drowning out our own?  But then, I think, it is the act of telling one's own story, that has a purpose in itself.  It is a way of re-evaluating and taking stock of one's life.

What is so poignant about this production of Beckett's play, is that John Hurt was cast in the role about a decade ago, and the tapes that he used on stage, seem to be from that other show, as they sound so much younger than the voice of  the actor on the stage in 2013.  In that way, we are witnessing the real and actual ageing of the actor before our eyes, or at least we are very conscious of it.  It makes the drama seem more real somehow.

This is a play full of invisible mirrors; we hear a voice from the past and imagine the events he describes, then we watch the older Krapp's face and we see him reliving the moments described by his younger self.  The effect is magical.  If we are the secret voyeurs, he is also one; a voyeur of his own life, constantly revisiting his younger self, re-living a time gone by.

But why does he do this?  Why is he so caught up with the past?  Is this some kind of self-motivational tool?  Some kind of therapy?  Perhaps it is, but I feel it has a lot more to do with memory and how so much of our memory is lost over time.  Perhaps this is Krapp's attempt to undo the damage, the real damage, caused by ageing: memory loss.

Knowing people who live with dementia, it seems like a sensible thing to do, to capture life on tape for future reference.  Yet, sometimes, such preparation is in vain, as one's sense of self vanishes and self-recognition is not possible.

It interests me how Krapp is so hard on his younger self, but aren't we all?  Don't we all dismiss the style and fashion of our teenage selves as awful and embarrassing, with phrases such as, 'what was I thinking?'  In this way, Krapp is a universal figure, someone we can all relate to.

Ultimately, I believe that this play is particularly suited to being reviewed on a blog, because blogging is the equivalent of what Krapp spends the entire play doing, recording thoughts, for some imagined reader, perhaps as a means of working through one's thoughts, and making sense of the world.  But as the curtain goes down, and Krapp disappears once again in to the darkness, we know that there will be another 'last' tape, as the hours go on and the magic continues.
Posted by My Book Affair at 10:54 No comments: