Instructions for a Heatwave ~ by Maggie O'Farrell 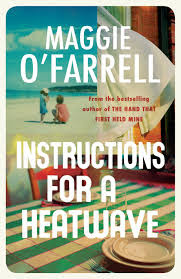 Flicking through these pages was like taking a stroll down a familiar path, into the past.  This latest novel, by Maggie O'Farrell, is about a family, called the Riordans - an unusual choice of name, considering that it was the name of a long-running tv drama that ran throughout the 1970s on Irish television, something akin to the BBCs 'Emmerdale Farm'.  Perhaps the author did this intentionally, because theirs is a very Irish family, complete with suffocating mother, sexual repression, religious fervor and fiery tempers.  (Please forgive any unintentional stereotyping, I speak as I find!).  The fact that this particular family actually live in London is quite surprising, considering how Irish they still are.
O'Farrell picks a particularly hot summer, 1976, in which to set her story, adding stress to the predicament that the family finds themselves in.  Mr Riordan, has disappeared and the children, who, for various reasons, are not as close as they once were, must return to the family home and face each other and their past, to work together to find him.
The idea is quite simple, but with the added element of the relentless heat, the old Riordan homestead begins to resemble something of a pressure-cooker, about to explode at any moment. In this way, the text could be easily adapted to the stage, and is reminiscent of Tennessee Williams's 'Cat on a Hot Tim Roof', in places.  She cleverly uses language to re-create the heat on that infamous year, writing long, meandering sentences that force the reader to slow down, as she evokes the stifled atmosphere of summer:


'But now the grass is a scorched ochre, the bare earth showing through, and the trees offer up limp leaves to the unmoving air, as if in reproach.'

She also uses her prose style to create the character of one of the Riordan daughters, Aoife.  This, the youngest of the three children, cannot read and was always a 'problem' child.  The author is not explicit, maybe intentionally so, but it is clear that Aoife has some sort of intense, sensual relationship with the world. Perhaps she is autistic, perhaps not, but she loves libraries and books, not for their words, but because she likes to touch their covers and look at their visual images.  When she looks at words, they jump out at her and attack her.  O'Farrell brilliantly describes her return to the old home in the highly visual style of Virginia Woolf.


'And yet here she is. Here is the row of trees, roots rupturing the paving slabs. Here are the tiled front paths. Here is the triangular-capped concrete wall that runs along the fronts of five houses. She knows without putting her hand on it the exact rasping, grainy texture of the concrete, how it would feel to try to sit on its unyielding, unfriendly ridge, the way the inevitable slide off it would catch and mark the fabric of your serge school skirt.'

Here O'Farrell brings us right inside Aoife's head by describing the way she experiences the world, through her senses.  This was the most enjoyable aspects of the novel for me.  I also liked the way she described the inner-life of Michael Francis, the only son in the family.  He continually disguises his true feelings and says and does things that he did not mean to say and do.  In this way, it make him a very likable character, who, just like his father, keeps his true self locked up.  Of course, the reason why these characters repress their true emotions becomes clear as the story is revealed and family secrets begin to reveal themselves.

The 1970s setting of the story really appealed to me, surprisingly so, and the whole ambiance of the novel was strangely familiar.  Because of this, I would recommend this book to my friends, especially any who grew up in the 1970s, and especially who are Irish, or have an Irish mother.  This is a fine summer read - buy it for your sisters and girlfriends and  take a trip down memory lane together.
Posted by My Book Affair at 15:58

Email ThisBlogThis!Share to TwitterShare to FacebookShare to Pinterest
Labels: Instructions for a Heatwave by Maggie O'Farrell