The Aftermath ~ by Rhidian Brook 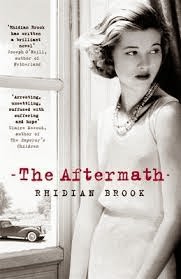 What struck me as interesting about this book, was the setting and the period - Berlin 1946.  We are shown a world where the German people are left trying to make sense of events in the aftermath of the Second World War; facing the reality that they are the losers.  The author manages to capture the sense of injustice and loss that the German people must have felt, through the characters of Freida and Albert, the young teenagers who resent the presence of the allied forces in their country.

The novel begins and ends cleverly with the feral street children, orphans who belong to no-one.  Like the monster children of The Lord of the Flies, they seem capable of atrocities, but are just children after all.  It provokes one to think about the way defeat in war time has endless repercussions for those living in the fallen country.

Of course, the book also deals with other issues, such as the breakdown of a family unit, perhaps inescapable in a war-torn city.  Everyone has suffered great loss, making the characters appreciate happiness when it comes before them, but all too eager to turn their back on the reality that they once knew and that now has no real meaning for them.

It seems that the world is ready to read books that tell the story of what the Germans suffered during and after the Nazi years, with novels like 'Alone in  Berlin' and 'The Book Thief' doing the rounds of the book club circuit.  Still, there is something unsettling about reading such texts, this one more than the other two.  In this novel, there is very little reference to the horrors of the concentration camps, and I think that this is a mistake.  There must be balance in all things, especially when dealing with this time period in Germany.
The prose was nicely written and the plot-line perfectly enjoyable, making this a book that I would recommend, but I would not re-read, the subject matter being a little to light for my liking, especially considering the period in question.