The Pleasure Seekers~ by Tishani Doshi 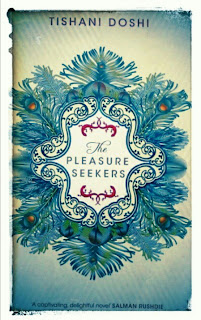 Alive with the sounds, tastes and smells of India, here is book to set your taste buds tingling! While 'The Pleasure Seekers' ostensibly tells the story of a young Indian man, Babo, who falls in love with Sian, a red-headed girl from Wales, it is much more than that.  The opening paragraph recounts a dream- the very first dream- of Prem Kumar Patel, Babo's father, in which he climbs mountains trying to find his wife and four children, feeling as if he was taken 'back to the coils of his mother's womb' and hurled 'to the end of his life'.  Such is the imaginative, metaphorical scope of poet, turned novelist,Tishani Doshi, whose prose style is the most original aspect of the book.  Indeed, as is often the case with modern novels, nothing very unusual or unexpected happens in this story; it traces the life-events of one family over a number of years, charts the highs and lows of life that we are all familiar with.  Yet what is original about his story is the way that Doshi considers these mundane events and shares her thoughts with the reader.  In this way, the book is more than anything a philosophical novel. Perhaps I should be more specific and say that this is a book filled with the author's views about life, people and familial relationships.

As the book is primarily a story of enduring love, despite prohibitive distances, both culturally and geographically; there is much for the author to ponder about the bonds that hold families together and the contradictory human desire to strike out alone in the world.  There is something which drives us all to become separate from the humans who created us, and this is what makes the book an interesting read.

I found  that Doshi was particularly insightful when it came to dissecting the mother-daughter bond, and the often traumatic separation that occurs in families whose parents hail from two, different countries.  The sense of belonging nowhere, yet yearning for a home place, is keenly felt on every page. 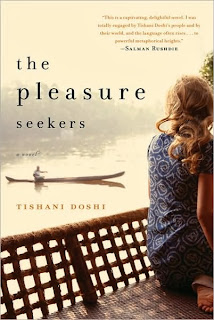 While I was captivated by the initial scenario, which is loosely based on Dohi's own parent's relationship, I did find that the second half of the book was somewhat disappointing.  The depiction of the parents as the eternal honeymooners, was particularly unrealistic in my point of view and detracted from the overall veracity of the text.
However, this minor disappointment was more than made up for by the wonderful character of Ba, the wise old grandmother, a semi-witch -like figure, whose blindness was compensated for by her extraordinary sense of smell.  Ba was a women who could foretell a child's future at a glance and could smell that guests were arriving , though they were many miles away.  It seems ridiculous I know, but Doshi manages to bring this almost mystical character into the novel and allows her to live side by side with her other more mundane earthlings.  This is a sign of the poet's deftness as she forces us to suspend our disbelief because Ba represents everything that we like to associate with India: mysticism, wisdom, knowledge, and ancient goodness.  I do not think that I would have enjoyed the novel half so much without her colourful presence in the book.
I cannot end without noting the many mouth-watering references to food in the novel: I had an appetite for Indian cuisine the entire time that I was reading the book.  I get the sense that food and the preparation of it is hugely important to the author, and her characters too.  And while the book begins with the story of the male protagonist, Babo, this is very much a story about women, mothers, daughters and wives; their lives, their choices and their relationships.  For this alone, I think the novel is worth sampling, and if nothing else, it will give you a taste of India that will send you scurrying to the pantry for that bag of rice, and that tin of coriander, to recreate something of the sensual journey that is promised by 'The Pleasure Seekers'.