'Wolf Hall' and 'Bring up the Bodies' ~ by Hilary Mantel 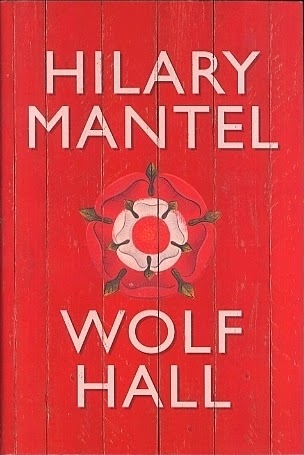 I never like to lump two novels together into the same blog-pot, as it were, especially not two such exceptional books, but so seamless was the transition between these texts, that they feel like one in my imagination, and so I will break the rule just this once.

From the opening scene, I was hooked.  Thomas Cromwell, a young English man, is being beaten badly by his father.  He is lying on the hard cobblestones, in agony, unable to lift his head to avoid his father's stamping heel.

How will he make his escape?  How can he survive when all the odds seem so stacked against him?  We are at once inside his head, experiencing what he experiences, feeling every hurt and ache as he feels it.  The novel is written in the continuous, present tense, making the narrative seem instantaneous, current, and so very real that one forgets that the book is set in the 16th century.  And that is my favourite thing about these book - and I have to lay my cards on the table from the start, dear reader - I loved these books - my most absolute favourite thing about the books is how fresh they feel.  They might as well have been set in 2014 in some ways, feeling every bit as real and perhaps even moreso, compared to many modern novels. 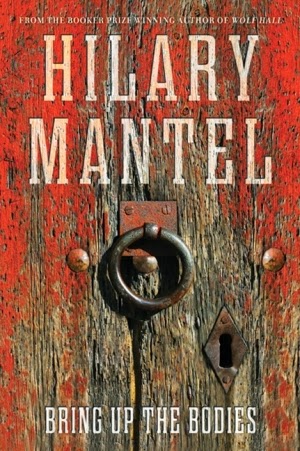 In part, it is because the book is told in the present tense, but also because the central character, Thomas Cromwell tells, the story, as if he is writing a verbal record of his life. But it is not as formalized as a traditional diary, because an omniscient narrator is also present; but the reader hops willy-nilly, in and out of Cromwell's consciousness throughout.

I must explain early on that the Cromwell at the centre of this novel is not Oliver Cromwell, the most hated of men (on this side of the Irish Sea at any rate).  No, this is the story of King Henry VIII's influential adviser, Thomas Cromwell, and how he came to hold such a position of power, beginning, as he did, as the son of a blacksmith.   It is almost completely impossible not to google Thomas Cromwell while reading this novel. Hilary Mantel has created such a vibrant, detailed account of sixteenth century England, that it is difficult to separate what has been imagined and what has not.  I continually found myself wondering, 'Did Cromwell actually say that?  Did he really think that?'

Clearly, Mantel has meticulously researched the period and the lives of those who populate these epic, historical tales.  We learn about the ins and outs of Medieval life, the working of Henry's court; the clothes and styles worn by people of fashion, (or not as the case may be). But we also see, first hand, the corruption of those in power (some things never change), petty sibling rivalries, bitter family squabbles etc.

Like I said, there is something of the moment about these novels. Mantel has managed to described the world of Medieval England with an immediacy that is beguiling.  She acts as an archaeologist who has resurrected these ancient characters and draped them anew, and presented them to modern readers, pumped fresh blood into their veins, fleshed them out with new passions, new feelings, new life.

In this way, Mantel reminds me of William Shakespeare.  It is the very humanity of Hamlet, King Lear and Othello, that allows these ancient creations to live and breath still in our imaginations, more than four hundred years since they first graced the Elizabethan stage.  It is just so with Thomas Cromwell.  Mantel has managed to do just that, filling the gaps in our knowledge about these historical figures, with her own imaginings.  She speculates on how they might have felt on getting married; when their first child was born; how they spent Easter, and even the family's involvement in the Christmas nativity celebrations. 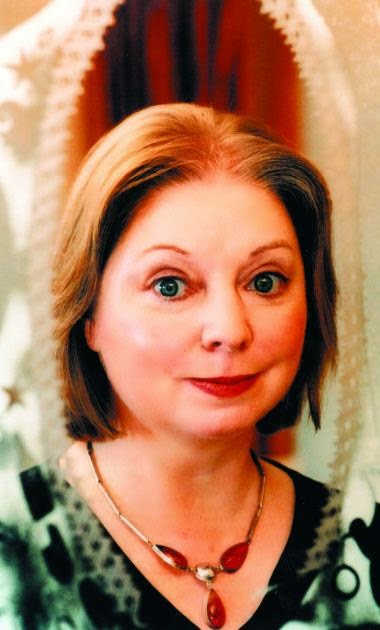 Who cannot relate to such familiar, family events?  It is because these characters' lives are draped with the familiar, cloaked with the ordinary, that the world they inhabit feels so wonderfully real.

One of my favourite moments in the book is when we are presented with the delightful imagine of Cromwell's young daughter Grace, dressed for the nativity play performance.  Her home-made angel costume, replete with long, peacock feathers, is lovingly made by her proud father.  This touching scene could be taken from any of our childhoods. Mantel chooses these universal memories to move us, prompt us, to imagine this 16th century world and, like the Thomas Cromwell of her novel, she manages it all effortlessly.

And so we are all left waiting for the third, and final, installment of this trilogy.  History dictates how this story will end, so we know, at least on one level, what awaits the blacksmith's son.  Yet, we can rest assured that the story will never have been told in such a way before and that Mantel will take us on a journey like no other, but it will be familiar in a strangely ordinary, human way.  We only hope that we will not have to wait too long.
Posted by My Book Affair at 19:27 2 comments:

The Gallery of Vanished Husbands ~ by Natasha Solomons 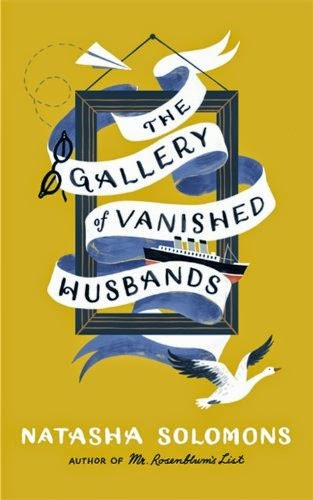 Already a big fan of Natasha Solomons, I couldn't wait to read her latest novel - hoping against hope that it would be just as good as 'Mr Rosenblum's List', or 'The Novel in the Viola'.  Was I disappointed?


Well, 'The Gallery of Vanished Husbands' is a novel that follows the life of 30 year old Juliet Montague; mother of two, Leonard and Freida, and the wife of 'vanished husband', George.  The latter left home on her birthday, and hasn't been seen in seven years.

She is just tolerated by the tight-nit, conservative Jewish community in a small village in England, where she lives, because she is an 'aguna': a woman whose husband has abandoned her.  She has to live as a living widow, because she is neither divorced, nor single.  To make matters worse, her husband was a known gambler and thief; local gossip claims that she 'could  not keep a man', and even her mother begins to feel guilty that they brought shame to the family by allowing her to marry a stranger, and not one of the usual local, 'nice boys'.

But Juliet feels no such guilt, and actually enjoys doing things her own way.  As such, she is a very likable character.  And when she fritters away her savings for the family fridge on a portrait of herself by a handsome, young artist, and complete stranger, we cheer her on, despite what the neighbours might think.
So begins a new life for Juliet, and Charlie, the young artist, and she embark on a business career together, setting up 'Wednesdays', an art gallery, where Juliet is the curator.  Of course, other artists come on board, and Juliet becomes a success in her own right. Yet, there is the problem of the missing husband, a love interest and two adolescent children to factor into things, but you get the picture. (Ahem!)


But what about the book in general?  Is it a good read?

Well, to start with, I thought that the structure of this book was very clever; it reads like a gallery catalog; each  chapter beginning with a painting, listed as it would be in an art exhibition.  The ensuing chapter then deals with that painting and how it came about.  The down-side of this formalized technique is that each painting must be contrived to fit into the story and, at times, I thought that the story and life of the characters became a little stifled as a result.  I wanted to stay with Max and Juliet in the cottage in the woods, but things move on quite quickly in this book - there is always another painting to be introduced and explained - and so, alas, we had to leave them behind too soon.

All the male characters abandon Juliet at some point in the book: George, Leonard, Max and even Charlie.

The only exception is Mr Green, Juliet's adoring father. In this way, this is a book about fathers too: the good father, Mr Green - who is always happy to see Juliet and has a special smile just for her, and George, the bad father - who loves gambling more than his children, and cannot seem to give himself wholly to fatherhood.

Indeed, the title refers to a newspaper column in an American newspaper, looking for men who have all abandoned their wives back in Europe' The Gallery of Vanished Husbands'.  Once again, as in her other books, 'The Novel in the Viola' and 'Mr Rosenblum's List', Solomons uses traumatic periods in human history, in this case the end of World War Two, to add drama to the plot.  It is the war that brings Bulgarian refugee George to England in the first place; a stranger who makes the older women anxious and the younger ones swoon.


|But there is another gallery in the book, not just the one of book's title, and that is the gallery of Juliet's portraits.

One might be excused for wondering about Juliet's slightly self-absorbed, quasi-narcissistic, obsession with her painted self.  What must it have been like for her children to grow-up surrounded by an ever-multiplying collection of their mother's image, gazing at them from every available wall space in their average-sized home? Perhaps this accounts for Freida's, at times, strained relationship with her mother.  Indeed, the narrator explains it best at the the beginning of the book when she says, 'Juliet Montague wanted to be seen'.

And, it is true, identity, is another key theme in this novel.

Juliet is constantly dealing with the expectations placed on her by the conservative Jewish community that she belongs to; her parents; her children; her friends, and even herself.  But more than anything she has to deal with the fact that she is a wife, yet not a wife; not a divorcee nor a widow.  The reason why Juliet is so upset with her husband for stealing the portrait of her, is because he has stolen her identity, her sense of self, her position in society.  In addition, he has made her an aguna - a living widow - someone who is not free to marry another, but not a socially acceptable married woman either.  She is a persona non grata, so George has, in fact, stolen her identity, making him truly the thief everyone knew him to be. As in real life, we must deal with how our identity changes as we grow older, and in a way, this is what Solomons cleverly comes to terms with in this, her third novel.

My one wish for this novel is that it came with a collection of paintings or illustrations.  (Ok - I realise that this is quite an outlandish ask and nigh on impossible - but it could happen!!?) It seems a little hard that in a novel filled with many references to portraits of Juliet, there would not even be one for us one to look at. But I suppose, that is what the imagination is for.

Read this book - buy it for your friends - you won't be disappointed!