We Are All Completely Beside Ourselves ~ by Karen Joy Fowler 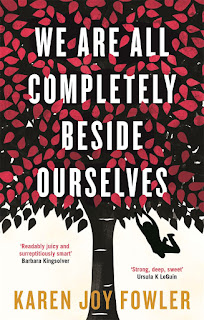 I didn't really take to Rosemary Cooke, the book's  narrator at the beginning of Karen Joy Fowler's novel, 'We Are All Completely Beside Ourselves' .  Much like Jane Austen's character Emma, I didn't find that there was much to like.  She is a precocious, apathetic college kid, devoid of endearing angst and apparently loveless. She cares so little about anything really; disliking her parents, distrusting her friends, if she has any friends, and has little interest in anything much.  Rosemary, is passionless.  She misreads people, doesn't know how to relate to them and seems very jealous of those around her, especially her sister Fern, hates her father and has mixed feelings towards her older brother, Lowell.

But of course, over time, we unravel Rosemary's story and we begin to understand her psychology. Why is she so uneasy in her own skin?  Why is she so insecure in her position as daughter in the family, and why do her sister and brother leave?  The cleverness in this book in is the telling - there is a great surprise, quite near the beginning, which hooks the reader and will not let you go until the book's end.


Now, I do not spoil books, but it is near impossible to review this book without giving away too much.  However, as I came to this book without knowing anything about it, that is how I think that you should come to the novel too.  Don't Google it beforehand or read the reviews on Amazon or Goodreads.  Instead, let the events unfold, as I am sure the author intended them to.


Some very basic facts-
At the core, this is a book about families and the choices that they make.  It considers the fragility of relationships and presents us with a portrait of the Cooke Clan, living in America in the 1980s, '90s etc. up to about 2012.  Told in the first person, this novel will get under your skin and by the end, you will feel that you are part of the Cooke Clan yourself.  The narrative starts in the middle and radiates backwards and forwards, much like the branches and roots of any family tree.  Rosemary will explain the reason for this herself.
Fowler considers the nature - nurture debate that people the world over all find so fascinating, and with the siblings of Fern, Rosemary and Lowell, we have three prime examples to study. The three share so many similar traits, but are very different.   Fowler also considers the impact that science has on the world in general and the moral implications that are involved with that, so be prepared for some big questions, as the author, through the experiences of the family,  forces you to consider some difficult truths about the world we live in.

So, I managed to discuss the novel, without a spoiler in sight.  What a relief.
Once you can get over the first chapter, and the annoying Rosemary, you will enjoy this book, and maybe even come to like the passionless, joyless girl; I suspect, like me, you will.

A God In Ruins ~ by Kate Atkinson 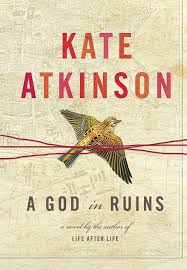 I don't know about you, but I couldn't wait for this book to be published.  Kate Atkinson is fast becoming one of my favourite contemporary writers.  Her stories dip into different genres, but at the heart of them all, lie wonderfully drawn characters who we come to really care about.  Having read Atkinson's previous novel, 'Life After Life', the forerunner of  this book, it was with some trepidation that I began 'A God in Ruins'.  The main reason for this was that things didn't always work out well for Teddy, whom I adored, in the last book and I was fearful of more of the same this time round. I didn't think that I could bear that.  However, despite the worrisome title,  'A God in Ruins', is far less bleak for Teddy.  He gets through the war and fulfils his dream of marrying Nancy, the girl next door.  His life 'afterwards' is quite normal.

Viola, his daughter and only child, is a disappointment; she seems to have been born angry.  It is unclear why such a loved and wanted child could be so unhappy, but perhaps this is one of the questions that Atkinson addresses in the novel.  Were the whole 'love and peace' generation, who came of age in the swinging sixties, all reacting to the violence and hatred of the years before their births?  Did they imbibe all of that angst?  Did they bear the psychological marks of trauma because of what their parents had done during WWII?  Was this some kind of trans-generational bad karma?  Either way, it seems to take a generations for all the anger to work its way out of the blood line, and it isn't until Teddy's grandchildren come along, that he begins to feel the familial love that he always hoped for and indeed expected.

Bertie and Sunny, are both sensible enough to appreciate Teddy for what he is, a kind, decent human being, who cares about nature and loves his fellow man.  Viola, the choleric daughter, can see nothing but her own pain, and is happy to destroy the lives of everyone around her if it means she has even a moment of happiness, which she never does.
Once again, Atkinson covers a wide period in history, the British during The Second World War, presenting us with amazing facts and figures about the time; giving us a history lesson in fact, not that we ever really notice. Her narrative is focused firmly on the lives of the small group of characters whom we come to know intimately.  Some are taken directly from the previous novel, such as Ursula and Sylvia Todd, for example, but it is not necessary to have read the companion book to appreciate this one, though of course, reading 'Life After Life' beforehand is highly recommended.  (See my earlier post.)

I cannot speak much about the ending of this novel - as with most of Atkinson's novels, her endings are full of unexpected twists and surprises, but I will say that with this novel, Atkinson has surpassed herself.  I found myself in a daze, one minute laughing, the next crying, as I stumbled over the last half a dozen pages or so.  What a roller coaster ride this novel has been. 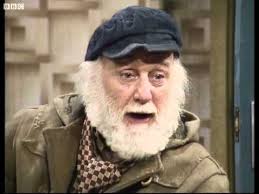 While reading the book, I was reminded, very often of the television show, 'Only Fools and Horses', in particular a character called Uncle Albert, who would often chime out the phrase, 'I fought a war for you , you know!' to which canned laughter was the regular response, along with rolling eyes and mocking jibes  from Del Boy and Rodney.  What this book does, is zoom in on the uncle Alberts of England, and consider that generation, who are now passing out of existence.  I never liked how those TV comedians treated Uncle Albert, nor the similar late 1970s punk ethos that sang/spoke a similar mantra.  I always have believed that the soldiers of WWII (and WWI for that matter) suffered enough on the battlefield.  The generation who lived through the Second World War really did strike out against fascism and saved the future for millions of us.

What Atkinson cleverly does here is tell the story of the countless millions of people who were never born, because their WOULD-BE fathers and mothers died in the war.  So, if Teddy had died, as he had died in one of Ursula's lives in 'Life After Life', then Sunny, Bertie and even the file Viola would never have been born.  Their whole stories would never have been.  But Atkinson, DOES write Teddy's story.  She breaths life into him, from childhood to old age and what a wonderfully warm, vital man he is.

I adored this character, his tenderness, his love of larks and bluebells, his bravery and sense of doing right.   Some of the time you feel, is this what he fought the war for?  Is this all he gets in life, a thankless, bitter child; a cold, sometimes distant, wife?  But life is unfair: ordinary life is messy and cruel, and old age is the cruellest of all.  And anyway, surely it is better to have survived the war, even if the 'afterwards', that Teddy and Nancy so often spoke of,  turned out to be less than ideal?  Surely it is better to suffer 'the slings and arrows' of this mortal life, than have it ripped away from you in the burning cockpit of a Halifax over the English Channel?

The description of the treatment or mistreatment, of the old is very moving.  The slow, relentless undermining of power and the rise of the next generation is heartbreaking to read, and we feel it more keenly because we are reminded of Teddy's brave, fearless youth through the use of repeated flashbacks to Teddy's war.  This narrative technique keeps the youthful version of Teddy always in our mind's eye and it is even more poignant to see the old and the young Teddy side by side, chapter by chapter, in this way.

Atkinson's narrative technique is also worth mentioning.  She is a weaver - and the tapestry that she creates is rich and bold, vibrant and intricate.  The picture created is at once familiar, a patchwork of familial relationships, tugging and pulling all the time, yet each one vital to the overall story.  Teddy, Nancy, Ursula, Bertie, Viola and Sunny, all coexist together, each has a story that needs to be told.  There would be no Teddy were it not for Ursula, no Viola if there were no Teddy and so on.  This patchwork the Atkinson creates resembles the very fabric of England; its people and their sacrifice during the war.  In this way, the impact of the war stretches through the generations, over time, touching us even now, and must never be forgotten.

I couldn't wait for this book to be published and now that I've spent the last week living within its pages, I feel like going back and reading it all over again.  I strongly advise you to do the same.
Posted by My Book Affair at 23:02 No comments: