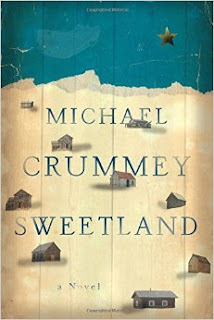 It is almost Halloween, and if you are looking for a book about ghosts, this is one for you.  But you won't find any horror here, just humanity laid bare, like the rocks along the lonely Newfoundland coastline; love and loss, life and death, the bountiful and the barren, side by side.

This is a book of two parts; the first describes in microscopic detail life on Sweetland Island: the topography, the characters, the weather and the whinnying refrigerator.  Alive, alive, this book is a breathing living thing. It is because the first half is so real, and we have come to know the intricacies of the lives lived there, that the second half of the book is so powerful.  It is as if we step from the real world, into some misty unreality, though that description is not quite right.  The world is half real, half out of memory, but seeming all the more vibrant and vital as a result.

When your life is touched by those who are suffering from mental illness, every experience is coloured by it.  The last time  read King Lear, it was about a proud old man, but this time, since my mother diagnosed with Alzheimer's, it has become clear to me that the play is about a man suffering from Alzheimer's.  It was the same with this novel. Surely this is a book about a man, Moses Sweetland,  losing his reason; a man slowly slipping into madness, succumbing to the memory loss (or gain, depending on your point of view) associated with old age.  In a way, this book is not very unlike 'The Buried Giant' by Kazuo Ishiguro, which I reviewed during the summer, which deals with memory and the power of forgetting: they certainly make fine companion books.
In terms of plt, this is a story about a island closing down.  The residents are being paid by the government to leave, the only codicil is that all must go.  Sweetland does not want to leave, and so his neighbours and friends pressure him to take the government package.  You must read it yourself to earn what happens.

One adorable character that we meet is Jessie, the young, Autistic boy who speaks regularly to his deceased great-uncle Hollis, though he is not the only ghost that haunts the island.  As in his earlier (fantastic) novel, 'Galore', Crummey presents us with the semi-comforting idea that ghosts walk beside us in life.  Once again, I was reminded of my mother, speaking of recent conversations she'd had with long deceased relatives.  Yet when Crummey writes it, it isn't unsettling or strange.  It feels natural, possible, plausible.
And this is probably why it is so difficult to finish this book and to leave the world that Crummey has created behind: there is a plain comfort in the frill-free, simple world he describes.  I find that I had to begin to re-read it instantly on turning the final page because the loss of the world, with interwoven lives, and colourful characters, was pretty unbearable.  Perhaps this is Crummey's greatest achievement: he makes us mourn the passing of a world that is all but disappeared except between the pages of a history book, or in the memories of the very old.  As such, Crummey is an archivist, a collector of memories, a Lady Gregory of our times!
But  the entire premise is debatable, questionable even: Is Moses Sweetland just a man with a vivid imagination, someone who has been alone too long, or is he actually losing his grip on reality?
There is something heroic, and noble about the man, a John Wayne of sorts in his ruggedness.  He is the one they rely on to fix thing, sort things out.  Yet he has made mistakes and has regrets, and these are the thing that haunt him in the second half of the book.

We are fearful that he won't leave the island, the threats are growing evermore serious, but we are more terrified that he will leave.  How can the man leave when his very name  is intertwined with the land under his feet.  He is the island, the island is him.  Perhaps this is one of the reasons that we come to care so much about this character; because we have come to are so much about the place, each colouring the other until they become synonymous with the book's title.
Michael Crummey should be given some sort of national award: he is done so much for tourism.  This book had me Googling flights to Newfoundland and pricing holiday homes in St John's, though I don't know if I would ever find much of  Sweetland's world in modern day Newfoundland.  It seemed too alien for Sweetland himself, though it would still be worth looking for.

Halloween or no, this book must be read and reread, for one reading will not be enough.  It will leave you heartbroken at the loss of it; the brutal landscape of the Mackerel Cliffs, the dogged tenacity of Moses Sweetland, and its people, ghostlike, yet all the more real for that.
Posted by My Book Affair at 21:23 No comments: 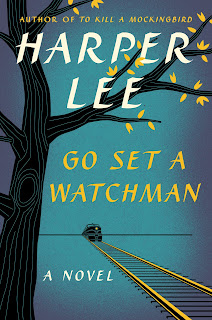 All along, I thought that it was a bad idea to publish this book - as a first draft of her Pulitzer Prize winning novel 'To Kill a Mockingbird'.  Did Harper Lee really want the world raking over her first attempt at telling Scout's story? I was especially suspicious that the novel only came to the world's attention after the death of Lee's sister last year, at 103 years of age. Alice Lee, an Alabama lawyer who was 'a confidante, housemate and gatekeeper for her sister Harper Lee', (Washington Post) had kept the manuscript amongst her possessions and it was only found by her lawyer, when she died. Should that lawyer have handed over the manuscript to the publishing world? Why hadn't the book been destroyed, if it was never meant to be published? Is it not like a diary, private yes, but begging to be read simply because it is written down?

The scenario reminded me very much of two hundred years ago and another set of sisters; Jane and Cassandra Austen. The elder sister, Cassandra decided to destroy many of Austen's letters, and perhaps manuscripts, too - who knows. No doubt, Cassandra did it to protect the integrity and reputation of her sister. She made that decision, and acted, perhaps on Jane's instruction, to set her sister's words alight. Did Alice Lee do wrong by not doing the same?

As an English teacher, I have read and taught 'To Kill a Mockingbird' many times and every time, I am still stunned by the skill of the writer and the wisdom of the text.  In hindsight, it was naive and foolish of me to be think that Mockingbird was born into the world, in so perfect a fashion.  What 'Go Set a Watchman' is, in fact, is a first draft of the novel that we love so dearly, and it must only be thought of in this way.  In this version, she decides to include how Scout deals with menstruation, her first dance, kissing a boy, learning about the facts of life; unimaginable in Mockingbird.  She also omits the trial and Boo Radley too, and gives Dr Finch a much more prominent role. The biggest shock, of course, is the revelation that Atticus was as one time, in the Klu Klux Klan.  Now, as Atticus explains it, it was only so that he could discover for himself, the identity of the other Klan members, but it is a shock nonetheless.


This novel is much grittier than its sleeker offspring; the racist filth that spouts from a speaker at a local meeting is meant to disturb and perhaps gives a truer account of what life was really like in Alabama in the 1950s.  In this book, World War Two has just ended, and Moville is littered with returned, injured soldiers, again, something new.  This brings a whole other flavour to the novel.


As the narrator in Watchman is omniscient, the book is much more adult in style and so can afford to be more adult in its content.  I can see why this style appealed to Lee in the first place, the subject matter being the stuff of adult life.  Let me just mention the title, which is a line quoted from a preacher in the novel and repeated by the narrator near the book's end.  To 'Go set a watchman', means to place a watchman, or a look-out, on your soul.  She is talking about how we all need to listen to our consciences, if we are to know the difference between right and wrong.   The irony is that it is Atticus, and perhaps the children too, who literally become  the watchmen for Tom Robinson in Mockingbird.   In hindsight, you can see how one book begot the other.
And that is , ultimately, why I think that this book is worth reading.  You can see how the character of Scout is formed - the feisty, opinionated Jean-Louise is not so very different to her literary daughter and even our understanding of Atticus, is deepened by reading this first novel.
So, I would say to you, that, in this case, I am glad that Alice Lee did not play God, as Cassandra Austen did, and destroy her sister's manuscript.  She left it to fate to decide its future and now it is up to you and I to decide to read it or not.  I have made my decision and am happy with it.   Have you?
Posted by My Book Affair at 23:11 No comments: