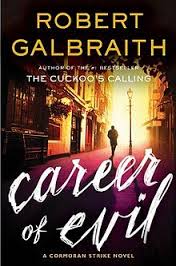 If this book gave Jo Rowling nightmares, you can certainly expect it to give readers nightmares too.  And while she takes great pains to articulate how the misogynistic killer in the book thinks and feels, I wish that she hadn't!  She brings us inside the head of a serial killer - we see him bite into the frozen breast of a woman who he has murdered and chopped into pieces, and kept in his fridge - and how he is aroused by this little treat. And this is just for starters.  There is rape, domestic violence, child abuse, all perpetrated against women or young girls. The book tells of an online website/club whose raison d'être is to discuss how having their limbs amputated is their greatest fantasy. Yes, this certainly is Rowling revealing her dark side, something readers of Harry Potter sampled in the penultimate novel of that famous collection.

Once again, Rowling has written a book series which starts out as one thing and becomes something else - something that I feel is somewhat deceptive.  Whereas 'Cuckoo's Calling' began as something akin to a Kate Atkinson novel, character-focused and light on the grotesque, this latest novel is more reminiscent of 'The Girl with the Dragon Tattoo', heavy on graphic violence, which, for me, was most disappointing, as I would rather have not read about a girl having her nose and ears sliced off as trophies, thanks very much.

Also, the Strike-Robin love story seems to go nowhere.  Rowling does not maintain the suspense and tension in their relationship successfully in this novel. It seems clear that Robin no longer cares for her boring boyfriend, Matt, and despite being a clever, independent woman, she stays with him.  There is a lot of Robin thinking about Strike, and Strike (sort of ) thinking about Robin; she is mad at him, he is mad at her and in the end we are back where we started and Matt, tall handsome Matthew, (the weakest character in the novel by far) puts up with it.

Basically, I feel like Rowling has broken that precious ingredient that is essential for a positive reading experience: reader trust.  I didn't expect the violence, I didn't enjoy the violence, and the my opinion of the novel was tainted as a result.  And while Jo Rowling claims to have enjoyed writing this novel more than any novel that she has ever written, and has gone to great lengths in the media to cry off clams that this book is it any way violence-porn, I will think twice before reading a "Galbraith" novel again.  Like a box of every flavour beans, with a Rowling novel, you never know which author you are going to get, and sometimes it just isn't worth taking such a risk.
If you seek a book that will give you nightmares, than this is your lucky day - I think I may just have found the perfect book for you.  If not, buy yourself the latest Kate Atkinson; you'll get exactly what it says on the tin.
Posted by My Book Affair at 23:30 No comments: