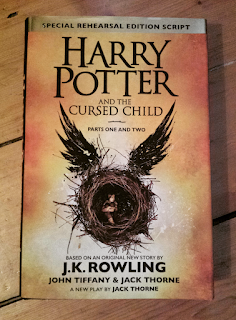 Didn't we already say goodbye to Harry Potter?  Didn't we grieve at the end of 'Harry Potter and the Deathly Hallows' and mourn the end of the wizarding world?  Well, those were wasted tears.  To all intents and purposes, this is just like all the other Harry Potter books, so you should allow yourself to get excited about this publication.  A new HP book - something we thought would never happen.  The fact that it is written as a play is very interesting, forcing the reading to imagine so much more than with the novel.  Many of the locations are already familiar to Harry Potter readers, so it is easy for us just to recall previous descriptions, such as the headmasters office at Hogwarts and the owlery.  Like so many of the previous books, this one begins on platform 9 3/4 at King's Cross Station, and a train journey on the Hogwarts's Express.   But some locations are new and it is very refreshing to imagine, without any detail forced on us via an omniscient narrator, a whole new wizarding world.
For so many readers, this will be the very first play they have read, which is exciting and interesting in itself.  I've always found that reading a play is a very intimate thing, as we get to hear directly from characters, and become very attached to them very quickly.  This is the case here as we meet the next generation of Harry Potter characters, which we were presented with at the end of the last book in the series.  As the book blurb says, this book focuses on Albus Potter, Harry and Ginny's son.  This, along with the book's title, 'The Cursed Child' reveal the most powerful of text's themes, the relationship between parents and their children.  Being a successful, famous parent is something that J.K. Rowling herself has some first hand knowledge of, and makes this play all the more interesting.

Rowling always toys with her readers; she will break your heart, shock you and take you into the unknown, expect the same with this book.  She throws more than one curve ball here and you might find yourself railing against plot turns and revelations, but you can trust her to deliver a very Harry Potter tale, which makes me wonder just how much the play's author, Jack Thorne had to do with the creative process that went in to making this 'Special Rehearsal Edition Script' as the book is described.  Rowling's name is in the largest on the cover and I suspect that the book will be filed under 'R' along with the other Harry Potter book in the library.  It must have been a strange, selfless thing to hand over a short story to someone else to develop, for Rowling to take the place of editor almost, while Harry's words and world are shaped and formed by someone else.  And lucky for us, it seems to have worked perfectly.

The thing you wished for for so long, another Harry Potter book, has come to pass - so fear not. Enjoy the hype and embrace this chance to enter Harry's world one more time.  It won't last forever.
Posted by My Book Affair at 22:47 No comments: