The Tenant of Wildfell Hall ~ By Anne Brontë 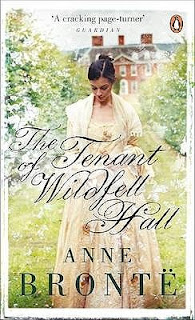 There were a number of stylistic features that I found really interesting in this novel. For a start, the narrator switches half-way through the book.  In this way, it is not unlike sister Charlotte Bronte's book, 'Wuthering Heights'.   The novel is structured around a collection of letters written by Gilbert Markham and others by Helen Graham, the titular character.  It takes a little getting used to, as your ear must re-tune to Helen'a voice and then back to Gilbert's as the novel moves along.  And these are long letter, as each author explains in full the minutiae of their lives.  But more than anything else, this novel details in full how a woman's life in the mid-1800s is controlled by her husband and how society, despite the laws governing divorce, still looked on marriage as the means of giving a man total control over a woman - her income, liberty and social standing.

There were times when I felt like I could not continue with the novel, hard though that is to admit, because I did not enjoy Helen's purity.  She was desperate to make a go of her marriage, to do the right thing.  How could a woman bear such treatment?  Well, it seems that Anne Bronte knew the limit of what a woman could endure and she presents such a character in this novel.  No one, liberal or conservative, could accuse Helen Graham of not doing her duty by her malevolent husband, Arthur Huntingdon, and so Bronte makes her point.  By the novel's end, you cannot doubt the power of this text.  In a world where women do not have the vote, where a woman is measured by the wealth of her husband's estate and by his successes and failures, it is an achievement that this book was written and published at all.  The fact that the book was originally published under a male pseudonym, Acton Bell, is in itself very telling and reveals something of the pressures faced by female authors of the time.

Helen herself uses her creativity as an artist to provide her with an income and I wonder if Anne Bronte herself considered Art as a means of gaining freedom and independence.  This was her second and last novel.  Her first, 'Agnes Grey' is a wonderful novel, and I recommend that you read it if you have not already.  This book contains little of the warm country characters that are so enchanting in 'Agnes Grey'.  Here the locals are far less endearing and are meant to be so.  Still, I missed the charm of those characters this time round, though I think that Bronte had more serious things on her mind.  She demonstrates beyond any doubt, that women need independence from their husbands, and her argument is so convincing that none could think differently.

Helen is a little saintly for our modern tastes perhaps, she is no feisty Elizabeth Bennet, more like Jane Bennet if anything, but it is important that Anne be beyond reproach as a mother and wife, so that the reader, even the most prejudicial, will take her side.  Balanced against the angelic Helen, is the dastardly Arthur Huntington, whose ultimate suffering is too good for him.  And here we are presented with another dark, troubled man in the Bronte cannon, making us wonder all the more who inspired such creations?  If it was indeed Bramwell, the Bronte brother, we can only imagine what horrors those girls endured and witnessed as they grew-up.  Let us hope that they each had very powerful imaginations and experienced no such torment as the women in their novels did.

So, if you enjoyed 'Jane Eyre', 'Wuthering Heights' or 'Agnes Grey', then you will also enjoy 'The Tenant of Wildfell Hall' (great title), and find yourself thinking again, what a pity it was that these three Yorkshire girls died so young, before they lived full and fruitful lives, and how thankful we are that the time that they did have was spent writing, leaving us these amazing novels in their wake, that teach us so much about the times they lived in, and the many injustices in the world.
Posted by My Book Affair at 23:23