Where My Heart Used to Be ~ Sebastian Faulks 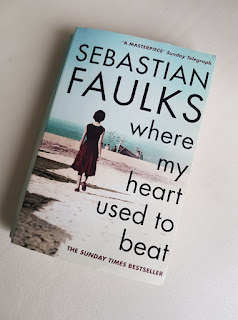 I've just finished reading Sebastian Faulks's novel, 'Where My Heart Used to Beat' and I have to say, I want to go back to the start and re-read it. That's not because the book was unbearably complicated, but because by the novel's ending. I was gripped by the story and enchanted by its characters, I don't want to say goodbye to them just yet. This is a story about one man's long, complicated, lonely life - simply that.  Yes - it really considers how can a person go through life not connected to another human being.  Are we actually alone, or does it just feel that way?  After all, we all have parents, acquaintances, and colleagues, don't we?  This novel focuses on someone whose life began during the Great War, and spanned the Second World War, its aftermath, the Cold War and right up until the 1980s.  I have always wondered about the generations who lived between the Wars, how they coped and how they survived that awful time, not just the soldiers, but their wives and children. This novel considers some of those questions and follows the life of English doctor, Robert Hendricks, the novel's protagonist, as he looks back over his life and begins to heal. He is contacted by someone who fought with his father in WWI and so begins a period of reflection that changes his life forever.

This is an incredibly moving book, Faulks takes your breath away with his hard hitting pathos and the end of this book genuinely left me winded.
What was so impressive was the way that Faulks builds to this point in the plot. He slowly layers detail upon detail in a meticulous fashion, but not so that you'd notice. It is only at the book's end that everything falls into place with staggering effect.  Faulks traces all of the minor and major moments in a life and connects them all together, creating a matrix of memories that is reminiscent of how Dickens creates Pip in 'Great Expectations', or David in 'David Copperfield'.  We live in the day to day life of these characters, and learn to love them. So it is with Robert Hendricks. From his earliest memories living with his mother, then school life with his Latin tutor, to life in the trenches on the Western Front, to endless hours with his patients and colleagues on the psychiatric ward - we follow Robert wherever he goes and come to know him intimately.
This book also deals with developments in psychology and the treatment of mentally ill patients during the twentieth century - Hendricks is a doctor of psychiatry. As such, the novel seems to me to be a cross between Faulks's 'Birdsong' and his later novel 'Human Traces' - not in terms of plot, but in terms of subject matter. Here the author returns to two topics that he knows well.  He is so at home in this period of history, it is easy to forget that he isn't a contemporary of Owen or Sassoon.  Is there any living fiction writer who writes so well or so movingly about WWI?
I'd happily recommend this book to a friend, but only after I have read it once more - I can't part with Robert Hendricks just yet.