The Girl with The Louding Voice 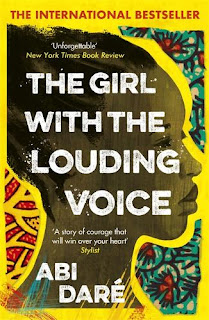 It has been a while since I read a book that I simply could not put down. This was such a book. I was gripped from the first page to the last to learn the fate of this charming Nigerian character, Adunni and I could not rest until I had. Everything from the unusual grammar and syntax to the description of household objects and social norms convinced me to suspend my disbelief and believe completely in this main character all all who journey through these pages.

The story is grim, yet happy - such a conflict. I still am feeling mixed emotions at the story's end.  It must be said that the book contains details of rape and attempted rape and as such I do not think it suitable for everyone.

Above all else though, is the incredible sound of this book. There is singing, yes, as Adunni's beautiful voice longs to express itself.  But as the title of the book suggests, having a voice is a central theme.  Again and again, characters tell Adunni to stop singing.  This is not because she does not have a nice voice - indeed there is power in it. She is able to sing an unborn baby and its expectant mother to sleep.  She uses her voice to sooth her terminally ill mother and it attracts compliments from others who hear her sing as she works.  But the malevolent characters in the book try to take away her voice.  She is beaten by Big Mama for singing in the garden.  The brutality in the face of Adunni's happiness is shocking.

But there is another sound that fills this book, it is the sound of Adunni's speech. Adunni's voice is the voice of the narrator in this personal account of life as a 14 year old Nigerian girl. The author uses Adunni's vernacular and writes it phonetically so that we can hear her voice rippling through every page. I still can hear her phrasing ringing in my ears days after finishing the text.

Adunni meets a neighbour who tries to teach her written English, and we see and hear Adunni change her language as she educates herself, but not entirely!  Adunni masters her use of words as she does her circumstances, learns, adapts and thrives, despite a difficult start in life. She finds her voice - a louding voice - and we know that for Adunni, there will be no going back.

This book will creep inside your heart and make its home there: a nest where Adunni will sing and sing forever - with a strong, full, louding voice.